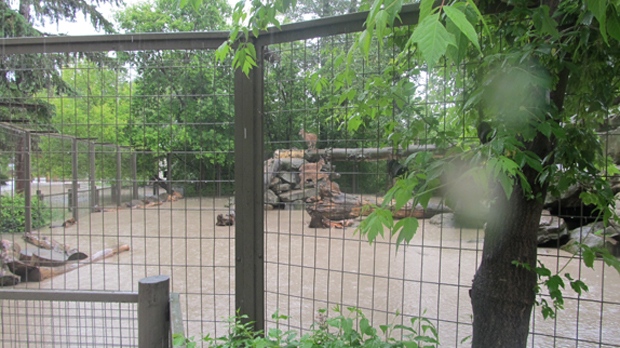 A makeshift pond in an enclosure at the Calgary Zoo (photo courtesy: Phil Shaw)

The flooding of St. George’s Island and the subsequent cleanup effort has prompted the Calgary Zoo to close its gates on the eve of the start of Calgary’s busiest tourist season.

Officials made the decision to close the zoo for the next two weeks after surveying the gounds by kayak.  The administration building, SCOW, the ENMAX Conservatory and the Kitamba Café remain under several feet of water.

All of the zoo’s animals are safe and accounted for.

In a statement released on the Calgary Zoo Facebook page, the President & CEO of the Calgary Zoo, Dr. Clément Lanthier, confirms all of the zoo’s residents remain at the zoo with the exception of two pot-bellied pigs which have been transported to the City of Calgary’s Animal Shelter and two zebras which have been relocated to the zoo’s ranch.  The zoo’s big cats have not been transported to cells at the courthouse.

Zoo officials are urging employees to stay away from the island until management confirms it is safe to return.