Canadian poets try to put the COVID-19 pandemic into words

CALGARY -- The pandemic has been a grim experience for artists of all types, but one thing they have always understood is that sometimes it’s possible to transform a bad chapter of life into powerful art.

That’s what 49 poets from Alberta, Saskatchewan, Ontario, B.C. and Atlantic Canada have attempted in Pandemic Poems, a new anthology edited by Edmonton’s Kevin B. Solez, that peels back the isolation and anxiety and economic hardship and turns it into beautiful words.

Twenty years from now, when the pandemic is a historical memory, English teachers may find themselves teaching pandemic-era poetry, all of which begs a question.

What is a pandemic poem?

A sonnet of sadness? A stanza of solitude? Rhyming couplets that keep their distance?

“For the purposes of our collection, it was something that reflects on the 2020 coronavirus pandemic,” said Solez, in an interview with CTV News, before adding that there’s one exception to the rule, a poem from University of Calgary professor Christian Bok called A Virus from Outer Space that he wrote pre-pandemic.

“It’s (Bok’s poem) about language being a virus and I just loved the concept, because what drove me to make the project was the novel use of language among my artistic friends, just on social media,” Solez said.

“(All but one) of the poems were written between March and June 2020 and most of them are poets, but also some thinkers, social activists, things like those who got involved in the present situation.” 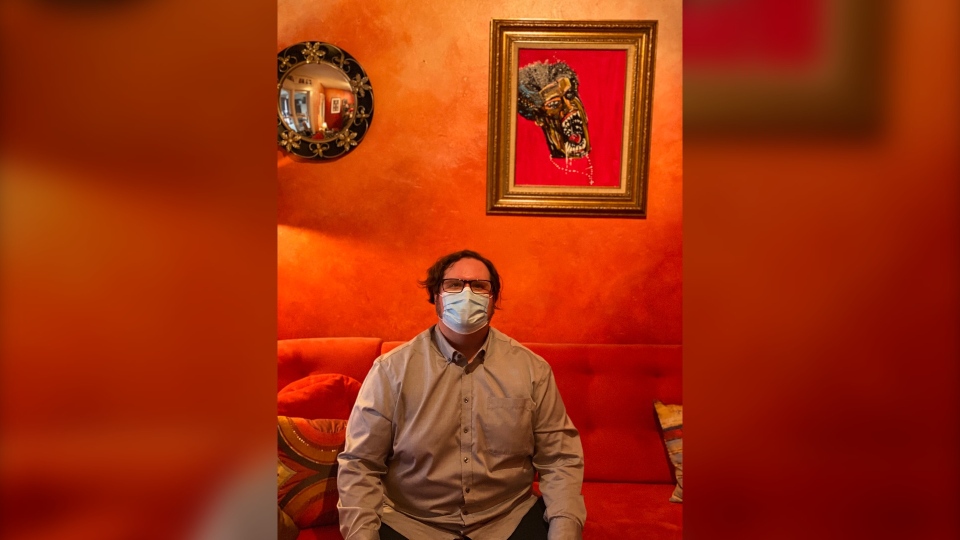 There’s an abundance of Alberta content in Pandemic Poems too: Thirty-five of the 49 poets featured in the book are Alberta-based, including playwright Eugene Stickland, Frances A. Willey (who also contributed the cover art), former City of Edmonton poet laureate Nisha Patel, One Yellow Rabbit alumnus Kirk Miles, Metis poet Cobra Collins and former Calgary poet laureate Sheri-D Wilson among many others.

Wilson’s poem isn’t about the gloom or the lonely or the sad parts of the pandemic at all.

It’s about kids - or as Wilson labels them, “bananarchists.”

“My poem for the anthology was a humorous one, about watching the kids next door go bananas after they were let out onto the street to play. It was a metaphor for what everyone has been going through, locked inside the house, and then the explosion of activity when they finally get that release,” she said.

is covered with little children far-gone

strung-out on speed, guess they

busted apart at the seams, freebased

now spilling into my yard

unrestrained, straight off the pages

of Dr. Seuss, thing one and thing two

got them ripped on stir-crazy juice

all over the front yard pell-mell,

Another one of the anthology’s poets is Willey, the co-founder of Seities, the Calgary-based photography magazine.

Willey is a much in-demand portrait photographer (and sometimes pianist) whose work has appeared in places like Italian Vogue. His work has been exhibited internationally, and much of that has been shut down in the pandemic.

Instead of flying to Paris for an exhibition of his work, he’s home with his two teenage daughters and partner.

“I stay home all the time,” he said. “Except going to the grocery store is more like a video game.”

That bizarre juxtaposition, where a trip to the Costco can look a little like the Fall of Saigon in 1975, was the inspiration behind the image that appears on the cover of Pandemic Poems a collage Willey created pre-pandemic called The Shepherd of the Cosmos.

Solez said there are a number of different themes explored by the poets throughout the book.

“And everybody talks about the lack of physical affection,” he said. “Women reflecting on the sexlessness of the situation. Men tend not to talk about sex but just the loneliness -- there’s no one here. What happens if something happens to me? There’s no one here.”

There’s also a strong connection to animals and nature in many of the poems.

“People, in the pandemic, feel more connected to animals than they do otherwise,” he said.

“We see people connecting with elemental forces,” he added. “Ice and rock, things like that – because human culture is totally chaotic, unpredictable, things are changing day to day – it’s hard for anyone to understand what’s happening – (while) the mountains and the river are the same.”

And for what’s it’s worth, as a second wave threatens to shut down the holiday season all around the planet, Solez said the aftermath of the pandemic might actually produce a boom in creativity, sort of – as Willey pointed out – the way the plague preceded the Renaissance way back in the 15th century.

“I’m proud that this is one of the first artistic documents of the pandemic,” Solez said.

“Lots of artists are making work, but you can go and buy this today and it’s a record of artistic responses to the pandemic.”