CALGARY -- Ryan Howie couldn’t believe just how brazen the thieves were when they ripped off the catalytic converter from a truck behind the fence in his northeast Calgary backyard.

The video, captured by his security camera, shows a pair of thieves arriving in his alleyway at 11:54 a.m. The passenger casually gets out, and is handed a saws-all tool from the driver. He then saunters into the yard, coming back out less than three minutes later carrying the stolen catalytic converter.

“It was pretty brazen and pretty shocking,” said Howie “and it was infuriating that something like this can happen in a neighborhood you think is safe.”

Howie isn’t alone in being a victim of this sort of theft. Police haven’t finished crunching the numbers, but say its clear catalytic converter theft is on the rise.

This year the number is growing quickly.

“The estimates are there's probably about six a day that are stolen in the city,” said acting Sgt. Dave Stewart of the Calgary Police break and enter unit. “And we have certainly seen an increase year over year on the theft of catalytic converters.”

That’s only the number reported to police, the real number may be much higher. Owners of the Minute Muffler and Brake shop on the corner of 17 Avenue and 52 St. S.E. said they are seeing an average of one victim a day coming into their mechanic shop.

“Back four or five years ago, we'd see one or two a month maybe. But now it's consistent,” said Murray Westling, one of the owners of Minute Muffler. “Every day we're getting calls for it (catalytic converter theft) or getting cars come in for it. So it's definitely on the rise. “

Used catalytic converters are worth between several hundred to several thousand dollars depending on the make.

Big House Converters is one company that purchases and recycles the converters. Owner Eric Grand-Maison said converter theft is a worldwide problem, driven by the high price of the precious metals inside the devices.

"This is a big issue. It's worldwide," Grand-Maison said. 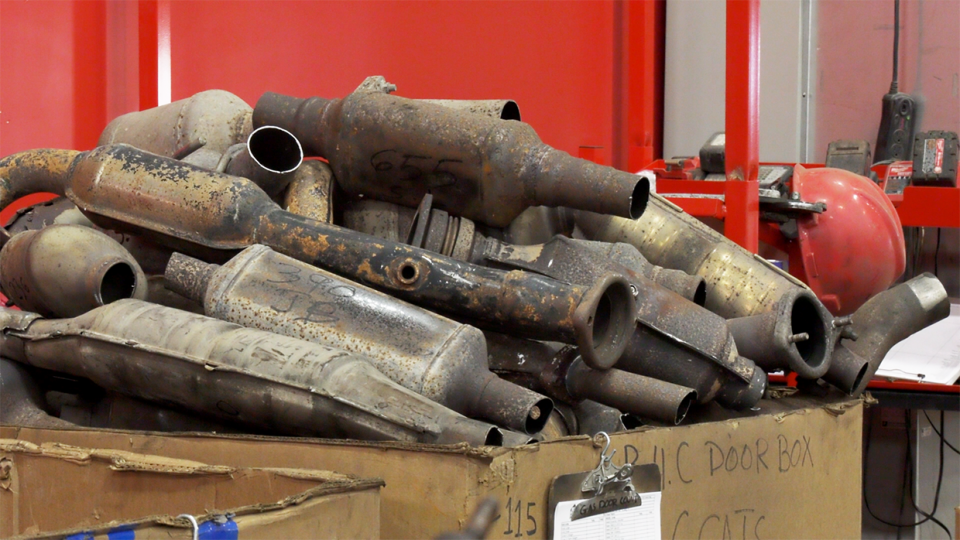 Grand-Maison said what’s really driving the thefts is the high price of platinum palladium and rhodium in the devices.

Rhodium is not in every converter, but those that do contain it can be worth several thousand dollars for scrap.

Grand-Maison regularly calls police when he suspects someone is trying to sell him stolen converters, and has had police arrive and barricade suspects in his shop’s yard.

Even when police arrive though, it’s often hard to prove that the suspects are carrying stolen converters. The reason: Catalytic converters are not stamped with serial numbers allowing them to be traced back to specific vehicles, in the way some other OEM auto parts are.

Grand-Maison regularly calls police when he suspects theft, but says since converters aren’t stamped with a vehicle serial number, it’s almost impossible to prove they are stolen

“So, even if they're caught with a whole bunch of stolen converters. There is no incriminating evidence," said Grand-Maison, who is currently working with other recyclers across Canada to devise a method to eliminate metal theft.

The province of Alberta has recognized the issue.  Last year it brought in new regulations for the scrap metal industry, introducing Bill 25, the Protecting Alberta Industry From Theft Act, and created a scrap metal intelligence unit, to track catalytic converter, and other metal thefts.

The act created new regulations setting out standards for the scrap metal industry. The new regulations determine what information is collected by recyclers and is available to police. It also requires all recyclers to standardize how they report the sale of scrap metals.

If you are see suspicious activity involving scrap metals, or suspect a scrap metal business is  not  abiding by  the rules, police say you could contact the provincial scrap hotline at 780-509-3123.