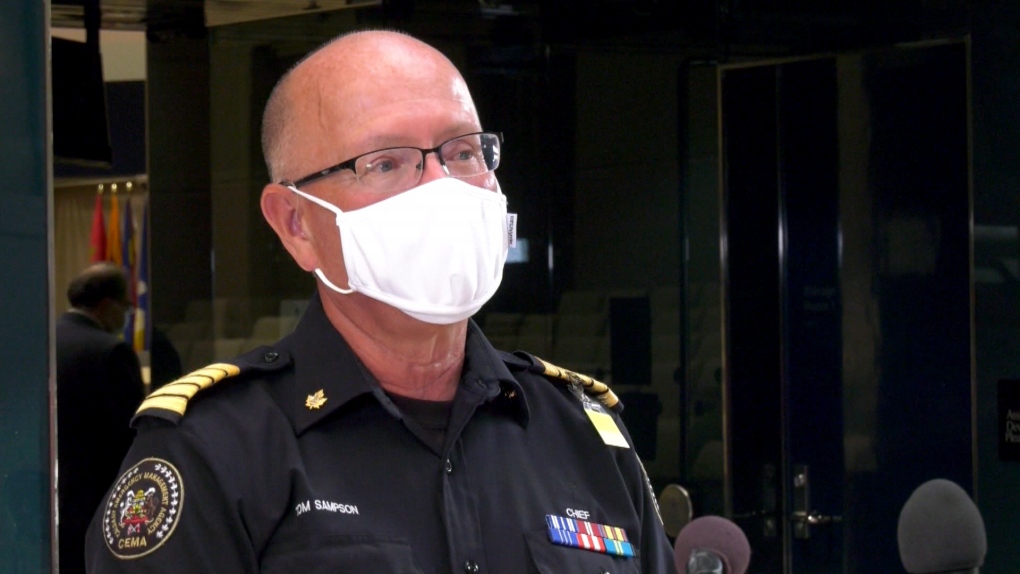 Sampson has been with the City of Calgary for the last 35 years, most notably as the head of CEMA for the last five. Recruitment for his replacement will begin immediately, he said, and that person is expected to be in place before his departure.

His voice broke with emotion as he made the announcement.

"I have been fortunate ... so incredibly fortunate," he said, his voice trailing off. "You don't know how much I love my job and I don't think you can have the commitment and the passion for this job without feeling it when you finally decide to walk away."

Sampson said he originally planned to retire last month but stayed on due to the ongoing pandemic.

"My original intent was to get us out of the State of Local Emergency," he said. "So I stayed on what was originally supposed to be four months, then extended it a fifth month, and the fifth month now is about recruiting my replacement and making sure that person is well oriented to the job so we don't skip a beat."

After graduating with a President's Honour Diploma as an advanced care paramedic, he received an Alberta Award and the Dickson's Bursary for Paramedicine, EMS. Sampson joined The city as a paramedic and spent 24 years in Emergency Medical Services, the last 10 as Chief of EMS.

He then spent a year supporting a former city manager as chief of staff and five years as a deputy fire chief with the Calgary Fire Department where he built and oversaw the city's disaster and emergency response team and assisted with business planning and budgeting, including driving the creation of the Emergency Operations Centre, which opened six months before the 2013 Southern Alberta floods.

The news of Chief @iceTyyc’s retirement really brings up a lot of emotions.

While I’m going to miss him immensely, and his departure makes me personally sad, I am very excited for him to move into a well-deserved retirement.

He has spent the past five years as chief of CEMA, leading the city's response to multiple disaster events such as the 2013 flood, major snow and hail storms, fires that have displaced residents and the COVID-19 pandemic. He has also led efforts to support municipalities throughout Alberta to address such disasters such as wildfires near Slave Lake, Fort McMurray and High Level.

"As CEMA Chief, Tom is one of three Commanders of Canada Task Force 2 (CAN-TF2), one of the six federal HUSAR, second AB all, a 'all-hazards' disaster response team of over 150 rescue, medical, technical, engineering, command and support specialists who volunteer to be available to respond to large-scale events, emergencies and disasters," the city said in a release.

"Through his work in CAN-TF2 he has been able to help many municipalities facing challenges. Responses to Slave Lake, Fort McMurray, the Chuckegg Creek wildfire have been the highlight. Tom will remain as a team member, sharing his expertise with the Alberta Community. CAN-TF2 is one of six nationally recognized teams that lead Canada's emergency response initiative in Urban Search and Rescue (USAR)."

In 2015, he was a recipient of the Meritorious Service Decoration from the Governor General, which recognizes individuals who have performed an exceptional deed or activity that brought honour to their community or to Canada.