CALGARY -- The province of Alberta has received its highest-ever grade when it comes to removing government regulations that put a burden on small businesses.

Alberta has received an 'F' grade from the CFIB for the past three years and, before that, had never received a grade higher than 'D. '

“It’s clear the Alberta government is committed to red tape reduction,” said Laura Jones, CFIB’s executive vice president said in a release. “We are pleased to see the government taking meaningful action on reducing red tape irritants by launching the cut red tape website and working to develop a count and comprehensive measure of the regulatory burden in Alberta.”

Premier Jason Kenney took to Twitter to express his delight with the result since the creation of his red tape panel last August.

“We’ll work harder to earn an 'A' grade next year!”

Associate Minister of Red Tape Grant Hunter kicked off the occasion by ceremoniously cutting a red ribbon with a large pair of scissors to symbolize the work his government has been doing to eliminate redundancies.

Hunter wrote on Twitter that he, too, was pleased with the result of the CFIB report card.

“We have more work to day, but we’ve come a long way,” Hunter said.

The UCP hopes to further streamline the process for businesses owners who have had to deal with issues such as redundant forms, web pages that are difficult to navigate and inconsistent answers from government officials.

Hunter said freeing up the hands of small businesses will act as a catalyst to creating more jobs and boasting Alberta’s economy.

Although, the opposition NDP called this week’s red tape events a blatant distraction from the UCP’s "terrible" economic record.

“Albertans are on the hook for $10 million over the next 3yrs for your ministry,” said Red Tape Reduction critic Christine Nielson.

“How about cutting the red tape that will help create jobs – your government is down 50,000 jobs right now – rather than recognizing a plan that hasn't worked.”

Nielson also made mention of the UCP cutting corporate tax rates, something the NDP continue to refer to as a "$4.7 billion corporate handout."

Premier Kenney, Hunter and representatives from the CFIB will address the media for a noon press conference in Calgary at Arn’s Equipment Ltd., located at 1107 46 Avenue S.E. 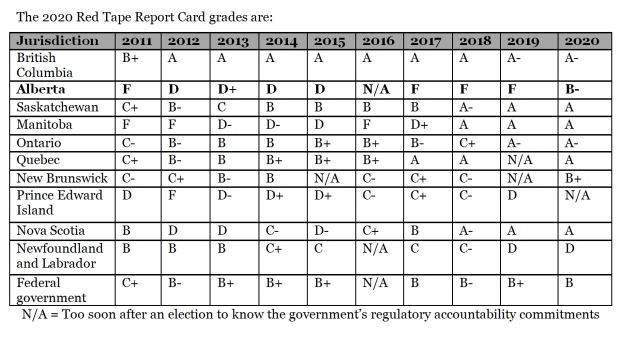