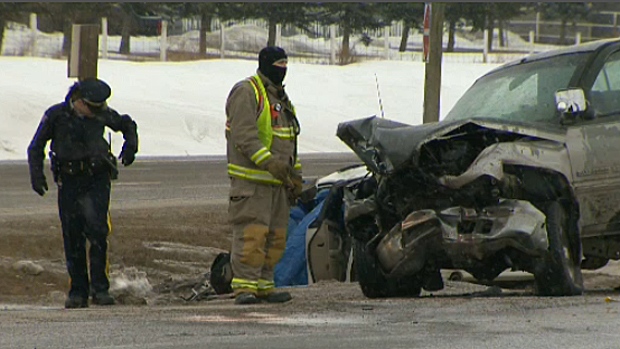 The eastbound lanes of the Trans-Canada Highway were shut down as a result of an early morning crash.

A 27-year-old woman is dead following a Wednesday morning crash on the Trans-Canada Highway east of Calgary.

At approximately 7:30 a.m., the driver of an Audi A4 travelling on Range Road 281 attempted to cross the Trans-Canada Highway when her vehicle was struck on the driver side by an eastbound Dodge Ram pickup truck.

The driver of the Audi, a 27-year-old woman from Chestermere, was pronounced dead at the scene.

The two occupants of the Dodge Ram were transported to hospital by ambulance. According to EMS officials, the two patients were an adult male in serious condition and a child in stable, non-life threatening condition.

RCMP do not believe speed, alcohol, or road conditions were factors in the crash.

All eastbound lanes of the Trans-Canada Highway were closed at RR 281 following the crash. The highway has reopened to traffic.