“Is there a purpose putting a bylaw in place that you can’t actually enforce?” said Councillor Briane Simpson, who launched a Facebook survey to determine how community residents felt about the issue.

“It’s definitely a hot topic no matter where you live,” added Simpson.

According to Simpson, almost 88 per cent of the people who responded to the informal social media survey were against the town enacting a face covering bylaw.

The Coaldale Chamber of Commerce also surveyed its members, and found the business community was overwhelmingly not in favour of a bylaw. 71 members of the organization responded to the survey, and just over 77 per cent of those were not in favour of making wearing a mask mandatory.

“One is they feel it takes away their choice,” she said.

Van Raalte said she wasn’t surprised by the results, adding that a lot of the businesses are already following AHS guidelines or measures set out by their corporation. 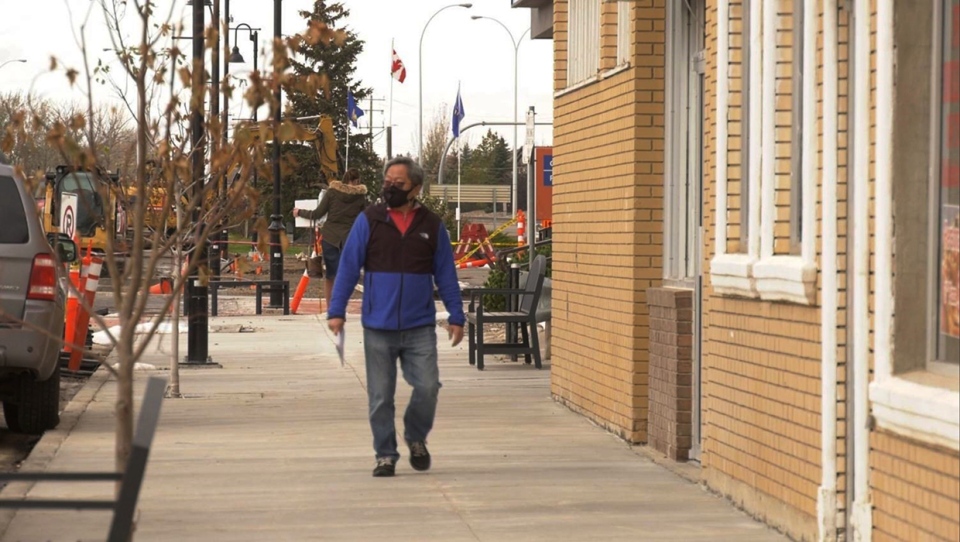 “They want to acknowledge the needs of their customers, but at the same time they want to have the freedom to do what they need to do to run their business.”

Esther Veurink owns and operates Chicken Feed Quilts, a quilting shop that has done well, despite the pandemic.

Veurink said she isn’t in favour of a mask bylaw. “I find when people wear a mask they are still in your face. They’re not doing social distancing.”

Instead, her store relies on hand sanitizing, a limit of six customers in the store, and following physical distancing recommendations.

“We have a lot of shoppers who feel more comfortable, and find a friendlier atmosphere without the masks.”

Veurink said they have out of town customers who come to the store because they have the freedom to not wear a mask. “If they wear a mask we’re totally fine with it, we are not going to tell them to take it off for sure, but they feel it’s more friendly when they can see the smile and faces.”

Chrysalis Café is a small coffee shop that supports the town’s decision.

Operator Krisna Schoen said masks take away from the personal feel of the café. “You can’t see people’s faces and can’t have a conversation because it’s too muffled, and it’s too loud in here with the blenders going.”

Schoen said she has also heard a lot of complaints from customers who have to wear a mask when they go to Lethbridge.

“Students from the university actually do come here and study because they don’t have to wear a mask.”

Councillor Simpson said in addition to the challenge of enforcing a mask bylaw, she was also concerned it could generate negativity between people with different opinions. “I noticed in Lethbridge as soon as the mask bylaw occurred, there was a lot of negative feed back going back and forth.”

Instead, council has chosen to engage in a public awareness campaign, and encourage residents and businesses to follow public health guidelines, including physical distancing and mask wearing when necessary.

The town also cancelled some planned public events, including a ceremony last Friday to celebrate the completion of the Main Street Revitalization project.

A decision has also been made to cancel the Coaldale Christmas Night of Lights Parade, which had been scheduled for November. The parade has been held annually for the past 21 years. Due to COVID-19, this year’s event will be scaled down to include only the Winter Light’s Festival and Christmas decorating competition for homes and businesses.