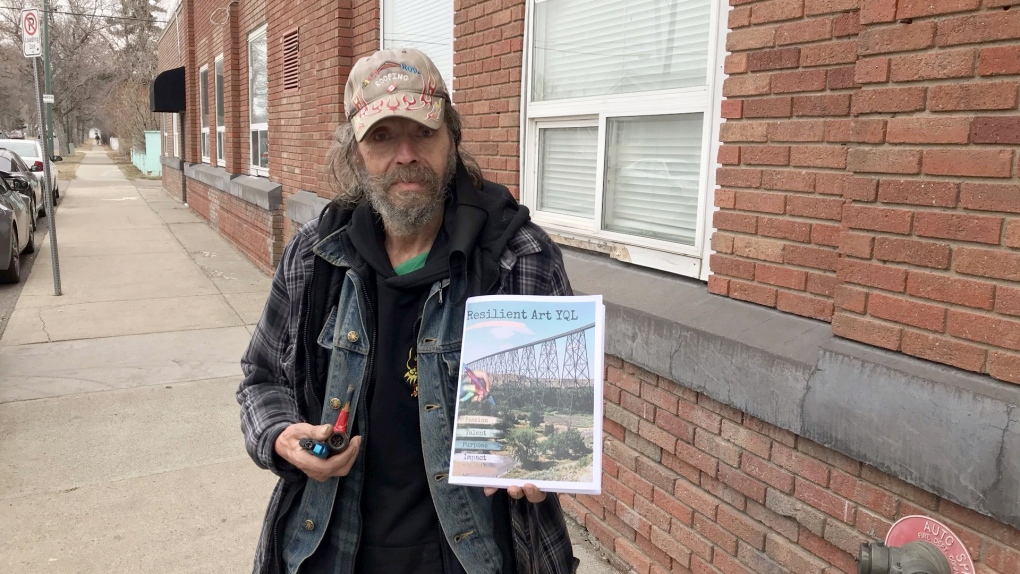 Richard Woslyng shows a copy of a colouring book he sold which helped him and his friend Lou find apartments of their own.

LETHBRIDGE -- Monday was moving day for Richard Woslyng and his friend Lou, who took possession of their own apartments after spending months at the Lethbridge Stabilization Centre and Shelter.

“It feels good to have keys again, that open a door,” said Woslyng, who had been staying at the emergency shelter since the end of January after previously living in a tent in the river valley.

“I showed up at the shelter when it turned 30-below. It was just too cold.”

Woslyng wasn’t sure how — or if — he would ever be able to leave the shelter, since he never had enough money to pay for a damage deposit and cover the first month's rent, something that’s required by most landlords.

But things started looking up after Woslyng joined an art program at the Lethbridge Soup Kitchen, called Resilient Art YQL.

Founder Tannis Chartier began the program as a way to establish a positive environment for people who find themselves in a negative situation, like Woslyng and Lou, who asked that his last name not be used.

“It gives a sense of hope. It’s somewhere to hang out and get your mind off being on the street,” said Chartier.

Woslyng will tell you he’s not an artist, but some of his doodles were featured in a colouring book, along with Lou’s drawings.

Chartier arranged to have 400 copies of the book printed, and all but a handful have been sold.

The men used the income to pay the damage deposit for small bachelor suites and cover their rent until February.

Chartier said it was more than she ever dreamed would happen.

“It’s crazy that something that was just a tiny little idea to maybe get some extra money, to get these guys some winter clothes, turned into housing," he said.

Lou said he had been “trapped” at the emergency shelter since August. He said finally having his own space is a big relief.

“It was tough being there, especially for somebody like me who doesn’t have an addiction,” said Lou.

The men say having an apartment means they no longer have to carry their belongings around in a backpack, and that they can come home anytime they want, without waiting to get inside, or being searched.

Woslyng says it means he can go to bed without being told where to lie down.

For Lou, it means he won’t have to sleep on top of his boots, which he often did at the shelter so they wouldn’t be stolen during the night.

“I was sitting there dwelling on what do I do? Where do I go? How am I going to get off the street? Now, here I am,” he said.

Chartier says this wouldn’t have happened without the support of many people, including volunteers from the Lethbridge Soup Kitchen, who’ve helped with the art program and the hundreds of people who bought them.

Her parents have also been a big help, by delivering the colouring books, and the Mission Thrift Store in Lethbridge donated furniture for the apartments.

“It feels a little bit like a Christmas miracle," said Chartier.