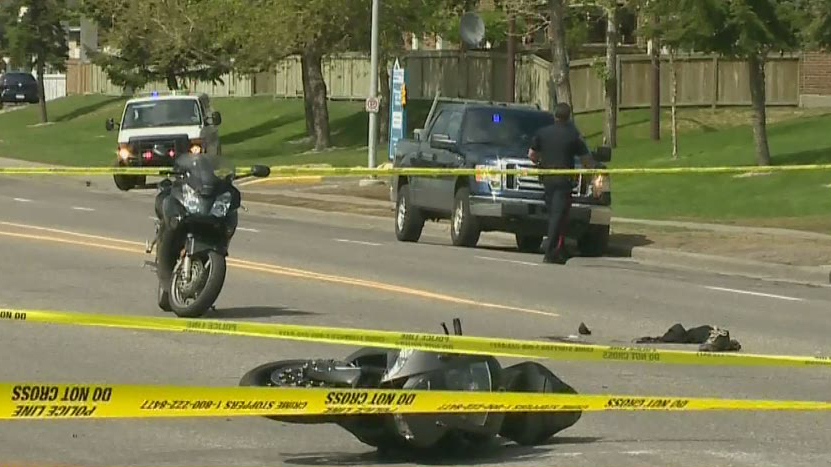 Rob Enstrom, 32, lost his life in May 2013 when the motorcycle he was riding collided with a cube van driven by Ryan Shuba. Shuba has been charged under the Traffic Safety Act, not the Criminal Code.

A Calgary woman is now spending her time in court trying to fight for justice in the death of her fiancé, who was killed in a 2013 crash.

Rob Enstrom, 32, was killed when the motorcycle he was riding on with a companion crashed into a cube van on May 26, 2013 at the intersection of Centre Street and Tache Avenue N.W.

According to police, the van crossed into the path of the motorcycle carrying the two men. They say the van then fled the scene, but officers managed to catch up with the driver.

Ryan Shuba, 32, was charged with failure to proceed safely under the province’s Traffic Safety Act.

Sarah Etheridge, Enstrom’s fiancée, has been attending the court proceedings this week and says the justice system is cheating her.

She says Shuba should be facing criminal charges because of the fact that he initially left the scene.

“Even in court today, they talked about the fact the hit and run unit was called out because we know the Penske driver did leave the scene of the crime,” Etheridge said.

She says that while the crash was just an accident, she still feels Shuba should have been charged under the Criminal Code.

Witnesses called to testify this week all said that Shuba crossed into the path of Enstrom’s motorcycle, but one witness did say that the victim and the driver of another motorcycle were racing at the time of the crash.

They said that the two bikes were going too fast to avoid the collision.

If Shuba is found guilty, the maximum penalty he could receive would be a $2,000 fine.

The trial is expected to wrap at the end of this week.