CALGARY -- Calls for blue flashing lights on tow trucks have been renewed following a crash that killed a tractor-trailer driver and left a tow truck operator in shock.

Trevor Snyder is calling for the safety measure after witnessing a Jan. 22 fatal crash from the ditch along Highway 2 just outside of Innisfail, just moments after stepping out of his tow truck to service a stranded vehicle.

“It’s just too unsafe. We just can’t keep up having this happen," he said. "One fatality is too many on our roads.”

The head of Snyder Enterprises in Beiseker said the tragedy reinforces the need for legislation allowing tow trucks to use blue or white emergency lights, something Saskatchewan approved in 2017.

“If we have certain safety measures such as these blue lights it might actually slow people down," said Snyder.

Right now in Alberta, tow trucks are allowed to have amber flashing lights, which is the same colour used for moving farm equipment and on road signs. But Snyder says tow trucks indicate an emergency, and specific lights could help signal drivers.

“If they see something a little different, it might give them an extra little moment to think," he explained. 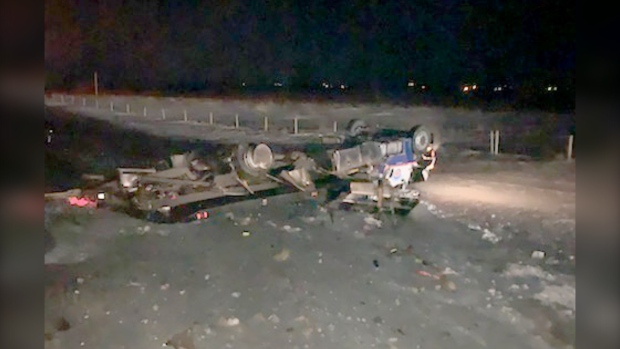 In 2017, legislation was proposed in Alberta but Bill 215, the Tow Truck Safety Act, did not move forward.

"Safety is our top priority, including the safety of tow truck drivers and workers, emergency responders and other roadside workers," said Transportation Minister Rick McIver.

McIver didn’t say whether the province is considering that specific legislation.

"We are actively looking at ways to improve safety on Alberta’s roads and will consider a variety of options as we monitor research and best practices from other jurisdictions," he said.

Snyder Enterprises is a partner of the Alberta Motor Association, which released a statement after the crash.

"This is a deeply tragic reminder of the ongoing importance of roadside safety – a responsibility we all share," it read. "A single loss of life is one too many. The protection of Alberta drivers and roadside workers alike will continue to be a top priority for AMA."

Snyder says he heard of two other similar incidents happening on the same day the semi collided into his truck.

“I was number 3 in a 24-hour span of tow trucks being hit on our highways," he said.

Snyder said he will keep pressing for legislation.

‘We’ve got to keep safe out there. Everyone needs to go home," he said.