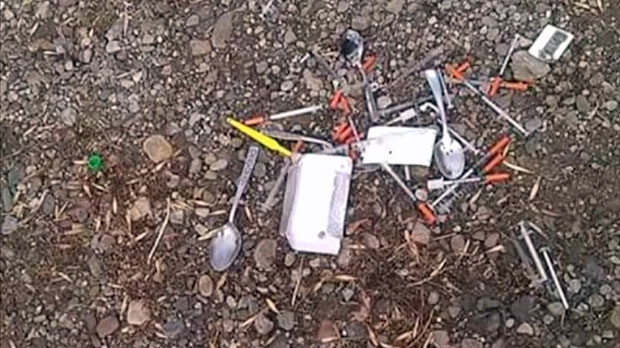 **CORRECTION: The original version of this story indicated ARCHES Lethbridge was located on 6 Ave S, less than a kilometre from where the needles were found. The supervised consumption site is located in the 1000 block of 1 Ave S, approximately 1.3 kilometres from the park.**

A Lethbridge mother is frustrated with the response she received from city officials after drug paraphernalia and dozens of needles were found scattered on the ground near Fleetwood Bawden Elementary School last week.

Lyra Angus says she spotted the hazardous litter in Kinsmen Park while out with her child. “I didn’t think I would have to explain drugs to my five-year-old quite yet but I had to do it.”

The mother of two documented the needles and drug paraphernalia and contacted the city in an effort to have the issue addressed. She says she was told that the drug paraphernalia was present due to the melting snow and that there are bins in the area for discarding used needles.

“With the consumption site being open and people using inside instead of outside, there’s less need for us to distribute syringes in the community,” said Stacey Bourque, executive director of ARCHES Lethbridge. “We’ve also been monitoring, trying to really encourage people to use in the space when they are coming in and they’re looking to take supplies out.”

“Lots of encouragement from staff to do an intake and use inside as opposed to taking those supplies out of the facility.”

Angus posted the video and photos she had recorded in the park to social media and was encouraged to start a petition calling for Mayor Spearman, city council and ARCHES to address the ‘mass amounts’ of needles that are haphazardly strewn about as the city faces a ‘major drug crisis’. She took the suggestion to heart and, in its first two days, the Needle Exchange Program petition garnered more than 800 signatures.

“I completely support the safe site, I support helping addicts, I just think we need better policies with the needle handout,” said Angus. “I’m not exactly sure what that policy would be. Maybe a needle exchange or you have to start paying for them. Something of that sort just so we don’t have so much debris all over town.”

ARCHES would like to see additional needle disposal boxes placed throughout the city. Staff of the outreach centre participate in needle sweeps through the community and officials are considering adopting alternative methods, including mobile consumption units, for known high use areas.

“It’s just one tool that we have to address an issue in our community but it isn’t going to stop it altogether.”

ARCHES has recently added more rooms to its safe consumption site and now offers around the clock access.

Anyone who finds discarded needles in Lethbridge is encouraged to call ARCHES debris hotline at 403-332-0722.

With files from CTV’s Kaella Carr