At this time last year, Flames goaltending prospect Tyler Parsons was a no show at the team's September Prospects camp. He was back home in Michigan battling concussion-like symptoms.

Parsons admits he went through some dark times.

“It definitely was a tough time,” he said. “I had a lot of ongoing symptoms that I just kind of let go on instead of fixing them right when they were happening”.

What a difference a year makes.

The 21-year-old is healthy now and feeling better than ever. He kept up with his strength and conditioning in the off-season but added something new to his training that has helped him both physically and mentally. He tried Functional Range Conditioning. His program was aimed specifically for goaltenders. 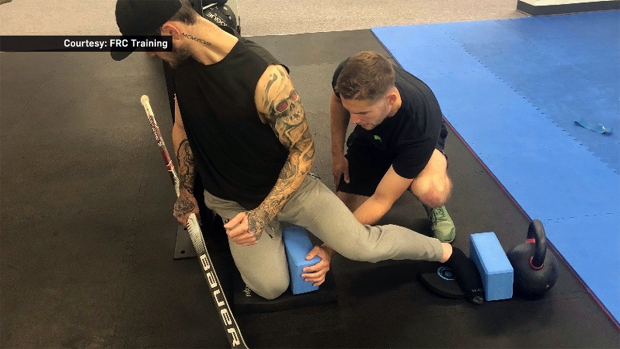 "Just really strengthening those un-ranged motions,” he added. “One of the best parts of my game is my flexibility, so I really worked on making those in-ranges really strong, so it was really good.”

Stepping onto the ice, Parsons says he noticed the difference in his game right away.

“I just feel so much more controlled. I don’t have to move as much. I’m building up those small areas in my hips and making them strong, which allows me to stay more upright and more controlled and way more explosive.”

After what he went through last year, Parsons appreciates the game more than ever. Mentally, he’s in as good a space as he is physically and says he doesn’t take anything for granted after his injury problems in 2018.

“You see a bigger picture," he said. "Especially going through that dark place. It makes you a bigger person and I’m happy I got through it and happy people helped me get through it.”

The Flames prospects take on the Edmonton Oilers prospects at the Scotiabank Saddledome on Tuesday night. Parsons will watch from the press box as Dustin Wolf is scheduled to go the distance in goal for the Flames.