COALDALE, ALTA. -- Only a handful of people can say they've made it to 100 years old, which is why the family of a former mayor of Coaldale wanted to let him know he has bee-come an icon in town.

Former Mayor of Coaldale and newly named centenarian Alan Graham was the guest of honour at a drive-by parade Tuesday to celebrate, as he describes it, “100 years of being loved”.

Graham’s youngest daughter Margot Mack said throwing her dad a personalized parade was a creative way to follow COVID protocols, at the same time allowing the community  to be part of the celebration.

“By having people drive by him here, stationing him…” she said pointing at two chairs - one for Graham and one for his wife Ida to sit on - to watch the parade “bringing people past and parking,  then we’re asking them to step out and kind of be a part of the singing and congratulatory remarks.”

Margot Mack said the Coaldale community has become like family.

“I enjoyed that…” Graham said “but I only stayed the three years that I was elected for because there were a lot of younger people that really wanted to take the job and so I let them go to it.”

Graham also worked as a beekeeper and since that has always been a huge part of his life, the parade was bee-themed. Graham even showed off his bee-themed socks to friends and family. 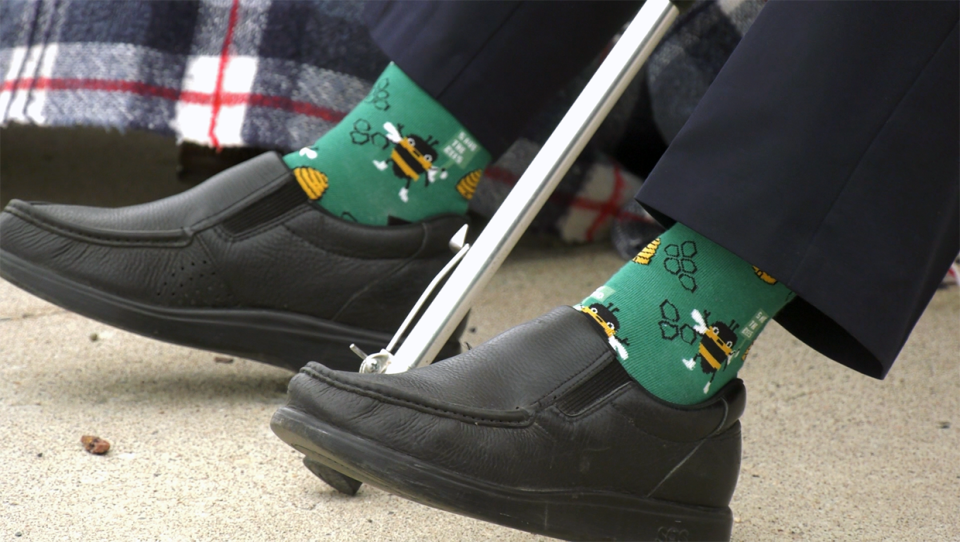 “I was working for the canola company and they had leaf cutter bees rented and honeybees rented and so they wanted me to examine the honeybees for them which I did for many years.” he said.

The parade was full of black and yellow balloons, cars decorated with bees on them and participants were even bee-stowed little wooden honey dippers. Graham - or as many people call him the “Honey Man” - wasn’t the first in the family to get into the bee business. Mack said it actually started with her grandpa.

“His father, my grandfather was a beekeeper. They were as a family very instrumental in the bee and honey business way back when.”

Mack said the Galt Museum and Archives will have an exhibit in the New Year about the 100 years of beekeeping in southern Alberta which her dad was very much a part of.

Beside the obvious love and support he continues to receive, Graham said the real key to making it to 100 years old is….