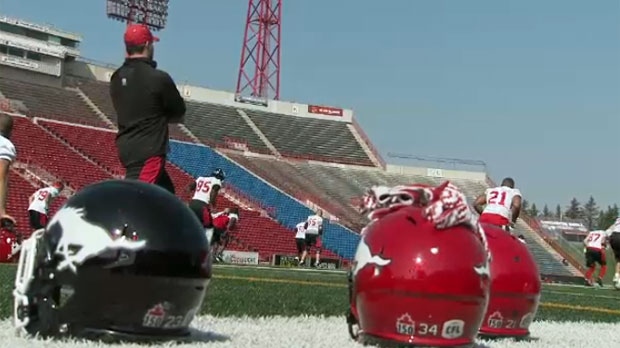 CALGARY -- Fans in the stands, division rivalries, and the return of the Labour Day Classic are just some of the things Stampeders supporters are looking forward to after the CFL announced its return to play.

The CFL released their 'comeback' schedule for the 2021 season Friday morning, which will start June 10, 2021 with a full 18-game season that will span 21-weeks.

Football will return to McMahon Stadium on May 23 when the Stampeders host the B.C. Lions in a pre-season game.

Those teams will meet again June 12 to play their first of the regular season.

"After the disappointment of losing the 2020 season, we're all looking forward to returning to the field in 2021 and seeing our great fans back in the stands at McMahon Stadium," Stampeders president and general manager John Hufnagel said in a statement.

Specific information about the CFL's plan to include in-person fans has not been released yet.

To reduce travel, 12 inter-division games will be played, up from 10 in previous seasons. Six of Calgary's first seven games will be against division rivals.

"The competition within the west has always been strong and the increase in games within the division means our rivalries … will be even more intense in 2021," said Hufnagel.

The fan-favourite Labour Day Classic will be played Sept. 6 against the Edmonton football team.

The Stamps’ regular season will conclude on Oct. 29 when they host the Hamilton Tiger-Cats

The CFL was one of the only Canadian major sporting leagues that did not play their 2020 season. The cancelled season was set to kick off in June, but was cancelled due to the COVID-19 pandemic.

An attempt at a shorter, hub-city 2020 season failed after the CFL was unable to acquire financial assistance from the federal government.

Division playoffs for 2021 will start in November, with the 108th Grey Cup game being played on Nov. 21.