The owner of Chakalaka Restaurant on 17 Avenue in Calgary recently celebrated his location’s grand opening on Feb. 15, but latest health restrictions effective Friday at noon now prohibit him from offering indoor dining.

“It’s very frustrating and unfortunate that regardless of how much money I’ve put in and how much work my staff has had to do, we still have to shut down and now they have no more jobs again,” Mupamvwa said.

Because the restaurant opened after Nov. 1, 2020, the owner says his facility is not eligible for the Enhanced COVID-19 Business benefit

The Alberta government will soon start rolling out payments of up to $10,000 to those eligible small and medium businesses affected most by the pandemic, but Mapawvwa says he’s been left with no support.

“They need to fix their systems as soon as they can, we can’t keep hearing that help is coming, we need it now – right now,” he said.

“If that’s not enough then at least give us a fair chance to know where we’re going, you can’t just say, ‘You guys are closed in three days, throw away all the food that you bought and find your own way of making money to pay for your bills.’”

The province has not given any indication of how long the closure of indoor dining will last for.

Alberta bar owners are speaking out and claiming that the threat of repurcussions from the province has become more heavy-handed.

CTV News has obtained a letter from lawyer, Chad Williamson, who represents Outlaws Taphouse and Bar – a southeast establishment that recently announced it was closing for good – claiming that its business license was pulled and its food handling permit had been revoked after the business violated a closure order.

Williamson says Outlaws was told by Alberta Health Services (AHS) that it had staff members who had failed to comply with masking requirements because of their alleged medical conditions.

The restaurant appealed the closures – a process that typically takes 30 days – but during the appeal, they were stripped of their business licence by the City of Calgary, the AGLC removed their liquor licence and AHS revoked their food handling permits.

“The alarming thing about these administrative actions being shovelled upon Outlaws, is that Outlaws was not provided an opportunity to respond to the AHS orders, they weren’t given the opportunity to appeal,” Williamson said.

“Their rights to procedural fairness were infringed and we believe that this constitutes an abusive administrative process.”

The concern of losing business licenses and food handling permits has now sparked some restaurants to change their mind over defy public health orders.

Our Flames Restaurant in Olds, Alta., released a post on its Facebook page that it will now be closed to indoor dining after first announcing it was taking a stand against the province.

“We have been advised that if we open, we would face losing our Food Handlers Permit, both out Liquor and VLT licenses and most likely receive a larger fine. That’s something we cannot risk,” read the post.

“We know much of you are going to say that we shouldn’t have backed down to the threats, let them scare you or look at others that defied the orders in the past. Legal advice told us that there is no constancy in the actions that were being taken against these businesses. Some would get a slap on the wrist,others would get the book thrown at them.”

Despite the potential repercussions, both Bulldogs Saloon and Tracks Pub in Olds have decided to remain open.

Other restaurants around the province that have still kept their doors open include J Rocks Restaurant in Medicine Hat, Alta.

The Whistle Stop Cafe in Mirror, Alta., also plans to stay open and has six live bands lined up for Friday and Saturday at its location.

According to AHS, the suspension or revocation of a food handling permit has always been an enforcement option it can use when restaurants are not following proper guidelines. However, before that occurs, inspectprs always work with establishments to help them abide by all health regulations, including orders from Alberta's chief medical officer of health (CMOH).

"AHS always seeks to work collaboratively with Albertans to ensure compliance with CMOH orders and COVID-19 restrictions," an AHS spokesperson wrote in an email to CTV News. "It is only when significant risk is identified or continued non-compliance is noted that AHS resorts to enforcement action. We continue to strongly urge everyone to follow the public health restrictions.

"By making the choice to follow public health measures, we can bring outbreaks and ultimately this pandemic under control faster." 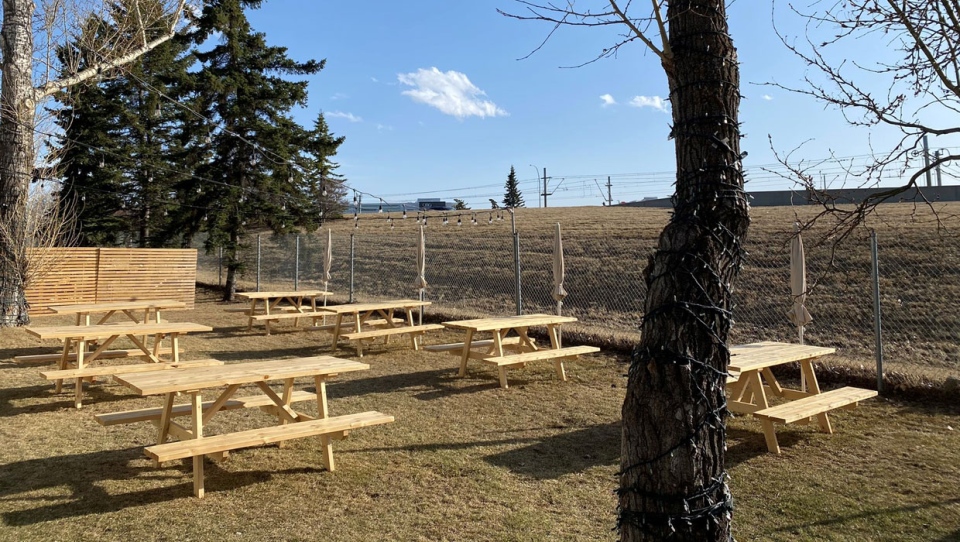 RESTAURANTS ADAPTING TO THE CHANGES

As restaurants struggle through the financial stress of the COVID-19 pandemic, owners are adapting to the changes and working to provide more outdoor options.

In just under two weeks, co-owner of Joyful Java Community Café, Jordan Smuszko was able to work with his staff to help create their own physically distanced outdoor patio at their location in Calgary’s Brentwood neighbourhood.

“We found a local gentleman who was making patio table affordably, which is incredible with the price of wood, so we took everything we had and got eight patio tables made,” he said.

“You know you’re really flirting with being able to keep things going with CERB or being able to pay your staff or rent, so we’re just grateful for some kind of option so we can have some customers come over and hangout and grab some coffee from us.”

The response has been overhwhelming as Smuszko tweeted out a photo of the new patio set-up, which has now been re-tweeted more than 1,300 times.

Customers at the shop like Graham Matheos agree that patios are best way they can show their support to local small businesses.

“The less people that are put in a situation where they have to close and have long term financial impact on them, the better and if it means coming for a coffee or going for something to eat on a patio, that’s an easy thing for everyone to do,” he said.

Other coffee drinkers like Austin Rieger say being able to socialize outside has provided a big boost to his mental health.

“To be able to go and actually sit with people and share that love and community right now, because right now there’s just such a lack of that.”