CALGARY -- Jobs, pipelines and reinvigorating Alberta's economy were the focus when Lt- Governor Lois Mitchell delivered the speech from the throne Tuesday in Edmonton.

If that sounds somewhat single-minded, that'sbecause it's exactly what Premier Jason Kenney had in mind.

The premier outlined what he described as the province’s $6.4 billion dollar commitment to the 2020 Capital plan and stance on renewing and defending Alberta’s economy.

“Ours is a government obsessed with job creation,” said Kenney in a news release.

“That’s why we’ll introduce our Blueprint for Jobs, which builds on policies brought in last year to keep business taxes low, cut job-killing red tape by one-third, and stand up for our energy sector.”

The speech reiterated  that the provincial government will do whatever it takes to get Alberta resources to market.

“When regulatory uncertainty, hostility by the federal government, or pressure from special interest groups inhibits investment in Alberta resource development, my government will act," Kenney said.

“Like the government of the late Premier Lougheed, Alberta is prepared to invest directly and support companies and Indigenous groups, when necessary, to assure the future of responsible resource development."

Leader of the opposition Rachel Notley saw it differently.

"This is not a good news throne speech for Albertans at all," Notley said, in a press scrum afterwards. "What we do see is a premier doubling down on making cruel cuts that hurt health care and education and the Albertans who rely on it." 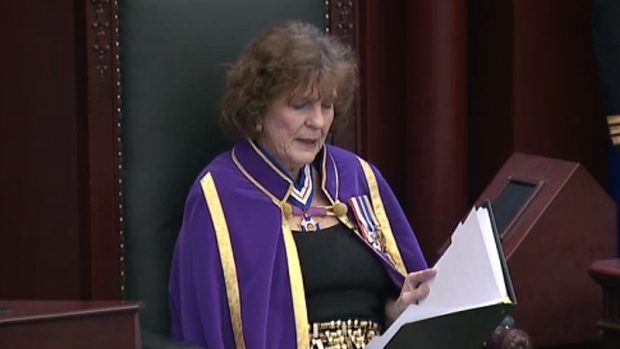 Kenney was asked about the possibility of the province buying the $20 billion Frontier Mine that was cancelled by Teck Resources on Sunday.

“We are not ruling anything out,” he said Monday.

"Teck was quite clear with everybody," Notley said. "They needed more private sector involvement (to finance it), and of course they needed the pipeline.

"For something like this," she added, "We need to listen to what the private sector and markets are telling us."

The UCP say they will introduce a comprehensive, long-term blueprint for jobs that focuses on restoring investor confidence.

The province also says it will cut red tape by one-third.

The speech from the throne outlined that Kenney’s government will introduce “several bills making it easier, faster and less expensive for businesses, community groups, and governments to deliver services and create jobs.”

The province will continue to promote economic diversification, job creation and growth in energy, agriculture, forestry, and advanced technology.

It also pledged to partner with First Nations to create opportunities for investment, jobs, and prosperity through initiatives like the Indigenous Opportunities Corporation.

To address fiscal issues, the government says it will reduce overall spending by less than three per cent over three years.

Health care, education and social services funding will be maintained at or increased to historic levels, and government will continue to protect front line services.

The implementation of the Surgical Wait Times Initiative.

The speech laid out opportunities for citizens to put issues to a referendum including:

o get big money and foreign entities out of Alberta politics.

o require a referendum before a consumer carbon tax can be imposed.

‘Advocating for a Fair Deal'

Following the report of the Fair Deal Panel, which is due next month, the province says they will act on its recommendations.

Following the speech from the throne, the Kenney government unveiled its first piece of legislation in the new sitting, Bill 1 -  The Critical Infrastructure Defense Act.

The legislation cracks down on anyone caught illegally blockading any piece of critical infrastructure, such as railways and roads.

"This is not legitimate and lawful protest," Kenney said.

The premier added that there will be multiple bills introduced in this sitting.