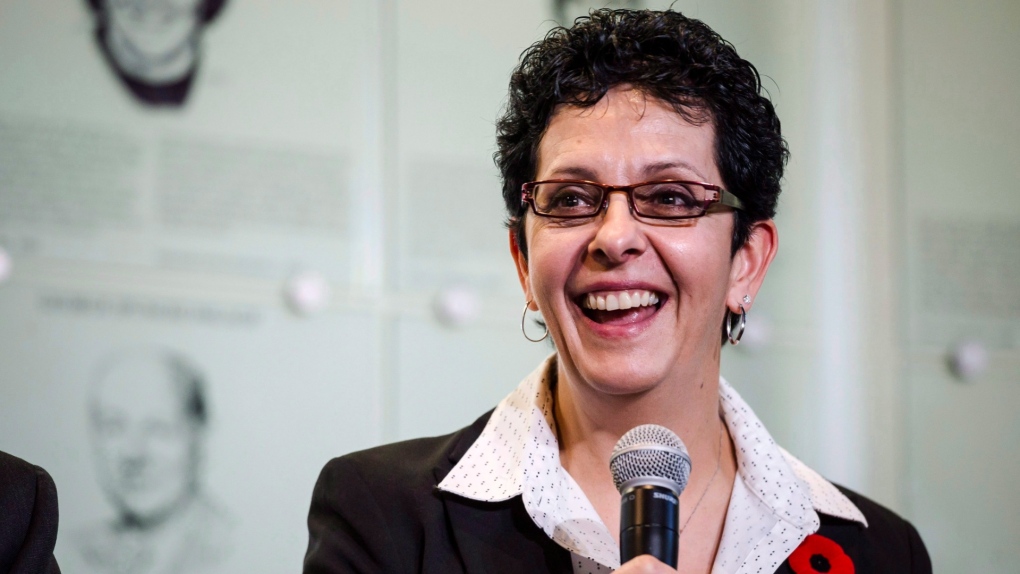 2017 Hockey Hall of Fame inductee Danielle Goyette speaks to reporters during a press conference in Toronto, on Friday, Nov.10, 2017. (THE CANADIAN PRESS/Christopher Katsarov)

CALGARY -- After 14 years as the head coach of the University of Calgary women's hockey team, Hockey Hall of Fame member Danielle Goyette is stepping away to accept a position with the Toronto Maple Leafs.

Goyette announced Monday she had accepted a role as director of player development with the NHL club and the team's AHL affiliate, the Toronto Marlies.

"It wasn’t an easy decision to make," Goyette said in a statement. "I loved my job, I loved working at the University of Calgary. I have grown a lot as a person and as a coach, and I had the chance to work with so many great people. I feel fortunate to have had a chance to make a difference for so many young hockey players.

"On the other hand, what an honour to have a chance to work for one of the best sports organizations in the world. This opportunity was too good to pass up – it’s a new challenge and I’m looking forward to working with the Maple Leafs and the Marlies. Changing cities and positions will be an adjustment, but I’m looking forward to the next chapter."

Goyette joined the Dinos in 2007 following her retirement from the women’s national team. She was a member of two gold medal and one silver gold medal winning teams, served as Canada's flagbearer at the 2006 Olympics in Turin, Italy, and was inducted into the Hockey Hall of Fame in 2017.

During Goyette's time at the helm, the Dinos accrued a 213-197 record.

The search for the next head coach of the University of Calgary's women's hockey team is underway.

"We’re certainly sorry to see Danielle go, but it really is the opportunity of a lifetime for her to join a world-class organization in Toronto and I know she will have success there," said Ben Matchett, interim director of athletics at the U of C. "Her drive and desire to win brought the Dinos to national prominence, and she has made an impact on hundreds of female hockey players during her time here.

"We can’t thank her enough, and we wish her the very best."