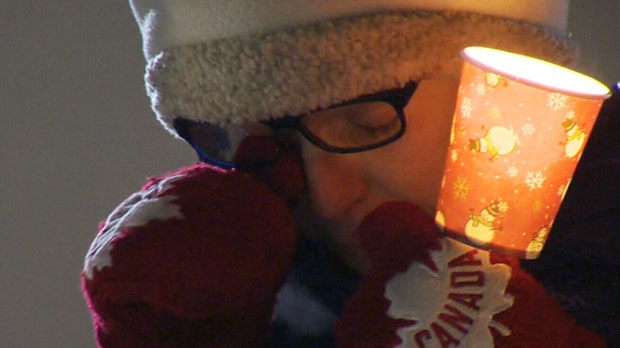 A woman wipes away tears during an impromptu gathering in Bowness on Saturday, December 30 to say goodbye to Baby Jane

A small group gathered outside of a northwest recycling depot on Saturday night to say goodbye to a life lost mere hours after it began.

Despite the fact the candlelight vigil for Baby Jane, the newborn girl who was found dead in Bowness on Christmas Eve, had been postponed due to the extreme cold, just over 20 people congregated on Saturday at the spot where her body was located.

An autopsy determined the girl was not stillborn and had died in the hours following her birth. T

The participants in the impromptu vigil said it was heartbreaking to realize the helpless baby was left to face the elements.

“It’s just absolutely heart wrenching to think that she was out here in these types of conditions, freezing with nobody,” said Chantelle Miller.

“I have a baby brother and a little cousin,” said Brayden Neufeld. “If that ever happened (to them), I’d feel so terrible. That’s why I’m out here.”

The organizer of the candlelight vigil had rescheduled the event for Wednesday, January 7 at 7:00 p.m. at the Bowness community recycling depot (7937 43 Avenue N.W.)

Member of the Calgary Police Service homicide unit continue to search for the baby’s mother who they believe may be in medical distress.