Hundreds gather in Strathmore to pay their respects to Kristian Ayoungman 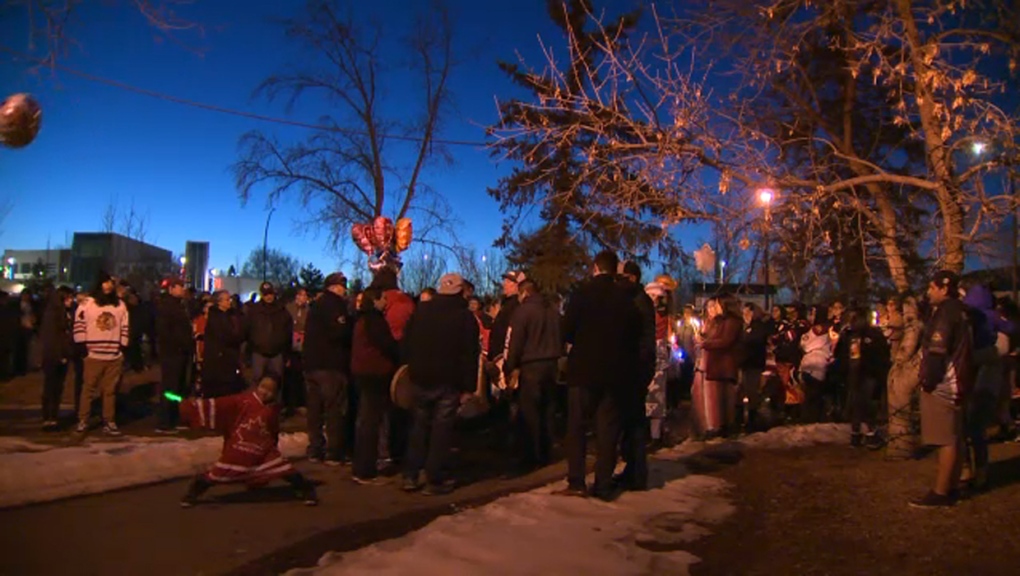 Candlelight vigil in Strathmore's Kinsmen Park on March 19, 2019 to honour the memory of Kristian Ayoungman

The family of Kristian Ayoungman gathered at the site of his death and later joined his friends and former teammates at Kinsmen Park in Strathmore on Tuesday night to honour the memory of the 24-year-old Siksika man.

Ayoungman was found deceased in his vehicle on a rural highway south of Strathmore in the early morning hours of Sunday, March 17.  The 24-year-old had suffered a fatal gunshot wound and an autopsy confirmed his death as a homicide.

A crowd approximately 300 strong paid tribute to Ayoungman in a candlelight vigil that included song and a drumming ceremony in Kinsmen Park. Many in attendance elected to pay tribute while wearing hockey sweaters as Ayoungman was an accomplished hockey player who had been a member of the Strathmore Wheatland Kinds Junior B hockey club and most recently played for the Siksika Buffaloes.

“He was a great kid,” said Darcy Busslinger, general manager of the Strathmore Wheatland Kings. “ He wasn’t the most vocal kid in the room or on the bus or anything but, you know what, he led by example.”

“He worked hard on the ice. His work ethic was unbelievable.”

Busslinger said he struggled to accept that Ayoungman was gone as he had talked with him only hours prior to the discovery of the body. “I was just talking with him on Saturday night. He was excited about going back to his job in Calgary this summer. He was working on the reserve in construction over the winter. Just an all-around good kid.”

“He lived every day to the fullest and had fun and had a lot of friends,” added Busslinger.  “He was brought up well and good values and good kid.”

Siksika Nation released a statement on Monday mourning the loss of the young man.

“Siksika Nation Chief and Council are deeply saddened by the passing of a remarkable young man from Siksika Nation. He was a role model to our Siksika youth and an outstanding member of the community. His passion for sport gave him the opportunity to touch so many people with his kindness and friendship. The community mourns the loss of a great man.”

Two Strathmore men have been charged in connection with the Siksika man’s murder and remain in custody awaiting their court appearance.