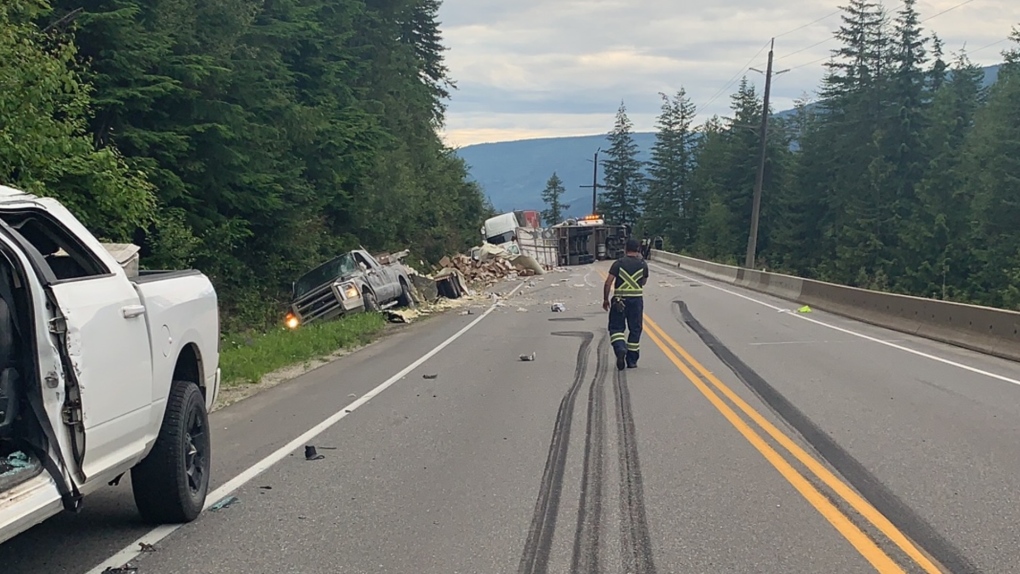 Damaged vehicles, brake marks on the highway and a field of debris following a July 15 crash on the Trans-Canada Highway west of Sicamous, B.C. (RCMP)

According to RCMP, a westbound semi hauling a load of groceries crossed the double solid line roughly 10 kilometres west of the townsite shortly after 6 p.m. and entered the eastbound lane of the highway after failing to negotiate a bend in the road.

Investigators say heavy brake marks stretched for approximately 50 metres from the westbound lane into the eastbound lane. The semi toppled onto its side and slid another 50 metres or so into an oncoming semi as well as three eastbound pickup trucks and an eastbound SUV.

RCMP say the 32-year-old Calgary man who was driving the westbound semi was transported by ambulance to hospital for treatment of injuries that are not believed to be life-threatening. The driver has been charged with one count of crossing a double solid line under the B.C. Motor Vehicle Act.

In addition to the semi driver, BC Emergency Health Services transported three adults to hospital from the crash scene in non-life-threatening condition.

Sgt. Murray McNeil, Sicamous RCMP Detachment Commander, said the outcome of the crash could have been far worse.

"This narrow two lane section of the highway has a rock wall on the eastbound ditch and a steep drop behind the concrete barrier on the western ditch," said Sgt. Murray McNeil, Sicamous RCMP Detachment Commander. "It is extremely fortunate that this collision did not result in multiple fatalities considering the length the truck traveled before finally coming to a stop and the extent of the damage sustained to all the impacted vehicles."

RCMP say the speed of the semi is considered to have played a role in the collision and driving conditions were excellent at the time of the crash.