CALGARY -- The owner of the historic King Edward Hotel that was destroyed by fire in Pincher Creek over the weekend says he is devastated by the loss and hopes to rebuild.

David McQuaig bought the 116-year-old landmark in 2006 and spent years refurbishing the restaurant and 14-room hotel, located about 98 kilometres west of Lethbridge.

The fire — which investigators think started at the back of the building early Saturday morning — burned for several hours before the brick and wood structure eventually collapsed on itself into a pile of rubble. No injuries were reported.

"It's a bit of a shock, it's a giant loss to me, but also to the community," McQuaig said Monday.

"I always looked at it that I was only the caretaker of that building for the last 14 years, and there's people that have had that building around for 116 years."

Firefighters were able to stop the flames from spreading, but the hotel was a complete loss.

"It's devastating," he said. "There's a lot of my heart and soul in there." 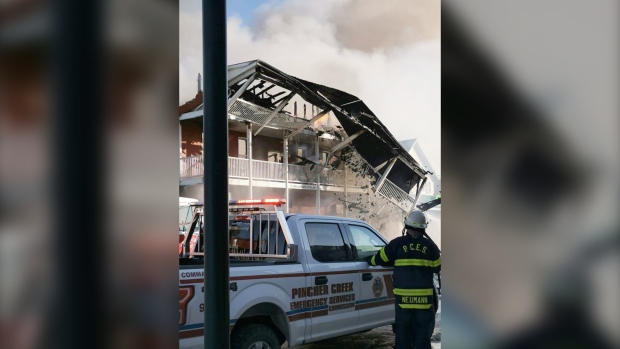 At first, McQuaig said he was hopeful firefighters would be able to extinguish the flames. He was called by his alarm company about 4 a.m. Saturday and raced to the scene.

"I went to go in the building and the first floor was a little smoky but the second floor, I couldn't go up to without a breathing apparatus," he said.

"I work every evening in the restaurant and bar so I know who my guests are, so I was able to quickly identify who was missing, and I thought to myself, I better go back in and start waking people up in case they haven't left."

Banging on doors, McQuaig said they helped two more people get out, before watching a decade of work go up in flames.

"About 7 (a.m.) we knew it was done because we could see the fire raging through the whole building and out the windows, and the fire department had pulled all its people out and it was just going to be defensive, to keep it from spreading down Main Street," he said.

Originally built in 1904, the building had slipped into a state of disrepair by the time McQuaig left corporate life — where he did mergers and acquisitions of medical and dental offices in Calgary — and bought it in 2006.

He did some commercial real estate deals as well, and one of his final clients was someone looking for a hotel.

"So, as I'm scouring all the hotels, I find this old, sad-looking hotel in Pincher Creek called the King Edward Hotel," said McQuaig.

"But I looked at the guy's financials and thought, 'he's got to be making some money down there,' so I came down and looked at it and it was the wild, wild west."

McQuaig didn't really have a plan at first. Going through the break-up of his marriage, he said he just wanted to find something to keep his mind, and time, occupied.

"I really loved the town, the community welcomed me with open arms," he said.

Then McQuaig and his husband, (Scott Janke) re-connected around 2010, and the renovations started soon after. 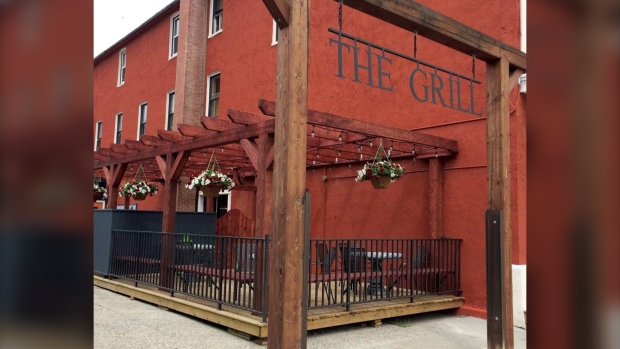 "(Janke) wanted to open the restaurant because we used to lease it out," he said.

"In 2012 we started renovating the restaurant, he built it from the ground up, the menu and everything else and it became quite successful. But the comments we were getting on Trip Advisor were, 'if you can get past the front door it's a great little restaurant and the food is awesome,' so we realized we were going to have to do some (more) renovations."

One of the first orders of business, he said, was to replace a patio and the balconies.

"It looked like the Thunderdome from the Mad Max movies, so we tore that down, then we tore down the old balconies, and $300,000 or $400,000 later we had completely redone the exterior with replicas of the original balconies," he said.

"The town people, they loved the fact we'd taken this eyesore at the centre of town and built it into something we could all be proud of. When we finished the painting and the new windows and added a big, beautiful deck … it became the focal point. The restaurant really blossomed, it was the most popular restaurant in town."

They then moved on to the hotel's interior, refurbishing each of the rooms and returning them to nightly rentals, rather than apartments.

"We had large suites, we kept the high ceilings and the beautiful woodwork," he said.

"On the weekends, every room was full, and it's been many years since every room in that hotel was full." 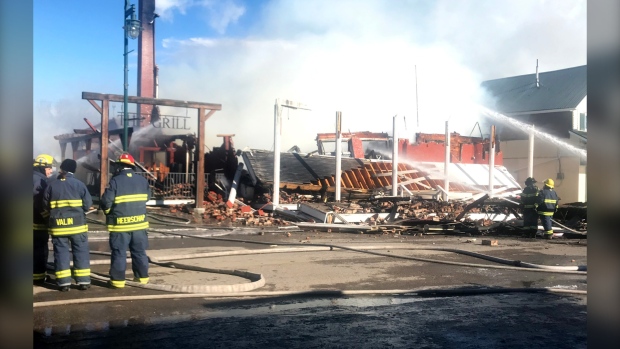 His fondest memory, said McQuaig, was while replacing carpets in the hotel. When workers pulled up the old ones, they found original hardwood underneath.

"I went downstairs and got a whisky and I walked those halls for about an hour, just thinking to myself, what has happened up here for 115 years," he said. "It was just such a surreal feeling."

McQuaig met briefly with his insurance adjuster on Monday and said the plan is to rebuild, as long as that's possible.

"I would very much love to rebuild, that would be the goal, so it's just a matter of talking with them and seeing where we are in terms of timelines," he said.

"It's a huge endeavour to contemplate right now. At the end of the day it will come down to what insurance will cover and what the town wants to do in terms of zoning."