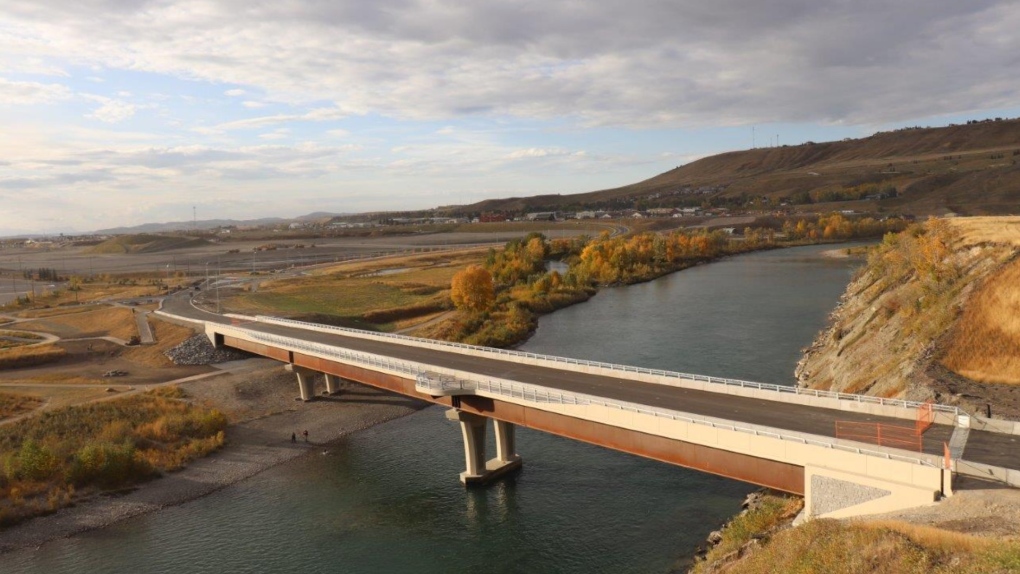 The Jack Tennant Memorial Bridge is set to open to traffic on Oct. 16. (Town of Cochrane)

CALGARY -- Aimed at reducing congestion in Cochrane, Alta., the Jack Tennant Memorial Bridge spanning the Bow River is set to open to traffic on Oct. 16.

A opening ceremony is scheduled for the evening before, which will be followed by a fireworks display.

The new bridge crosses the Bow River at the east end of Griffin Road and provides an alternate route between the north and south sides of the town northwest of Calgary.

“The Jack Tennant Memorial Bridge and connecting roadways deliver on council’s commitment to take traffic off the highways and is one more step to alleviating traffic congestion in our community,” said Mayor Jeff Genung in a release.

"This $53-million bridge and roadway was delivered on time and on budget, funded from off-site levies and provincial MSI grants. Best of all, it honours a Cochranite who dedicated his life to building bridges between people and communities.”

The bridge name was chosen by the community to honour Jack Tennant, a long-time Cochrane resident who was also the founder and publisher of the Cochrane Eagle newspaper and honourary member of the Stoney Nakoda First Nation.

There’s also a lookout area above the eastern pier for cyclists and pedestrians to enjoy a view of the river.

"In addition to fireworks, the official opening will be followed by two days of celebratory light shows, visible from both sides of the bridge and the multi-use pathway below it," town officials said in a release.

"The countdown to the official opening starts Monday, Oct. 12, with special under-deck lighting."

The work is part of a project that will eventually include an extension of James Walker Trail from Riviera Way through to Highway 22.