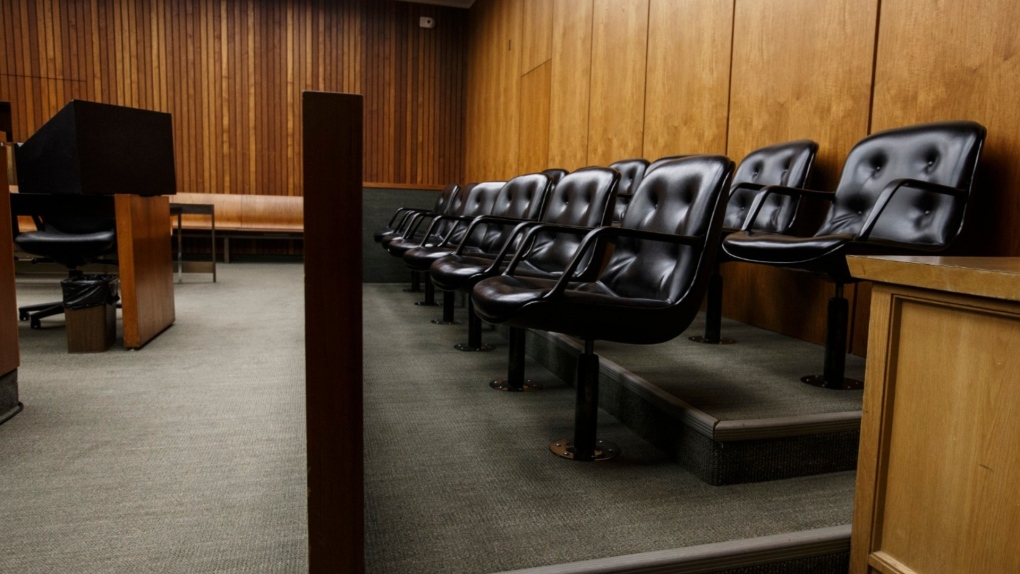 Jury box in a courtroom at the Edmonton Law Courts building, in Edmonton on Friday, June 28, 2019. The president of the Canadian Council of Criminal Defence Lawyers is worried the justice system will try to delay jury trials as it deals with COVID-19 at the expense of the rights of those accused of a crime. THE CANADIAN PRESS/Jason Franson

CALGARY -- The president of the Canadian Council of Criminal Defence Lawyers is worried the justice system will try to delay jury trials as it deals with COVID-19 at the expense of the rights of those accused of a crime.

Bill Trudell said a number of provinces, including Ontario and Saskatchewan, are postponing jury trials in order to deal with a growing backlog of cases after COVID-19.

"I hope that there is an encouragement to restart jury trials. I hope we don't get used to not having jury trials," Trudell said in an interview with The Canadian Press.

"I think a lot of people might say, 'Hey, let's go judge alone because it's more efficient and more expeditious and expedient,' and that's a terrible way of looking at it."

Trudell said he's worried there will be more pressure as courts start to make plans for the future.

"What's going to happen when we get rolling again, right? And there's these backlogs," he said.

"Judges are going to be trying to do their job in the best way they can and one of those ways is to cut down on jury trials, but there must be a real strong principled resistance to it."

Alberta's top trial judge said the court has suggested to both the prosecution and defence that there may be ways to consider having a trial before a judge alone instead of a jury to reduce stress on the system.

"In these difficult times ... I'm hopeful that consideration would be given by the bar to bringing down the number of jury trials we have," said Mary Moreau, the Chief Justice of Alberta's Court of Queen's Bench.

Trudell said there aren't many defence lawyers who would be interested in that.

"It's the accused's right to have a jury trial. I don't think you're going to find that many defence counsel that think expediency should trump the jury system."

A juror advocate is worried Canadians will balk at serving on juries when pandemic restrictions loosen.

Mark Farrant of Toronto became an advocate after he developed post-traumatic stress disorder following a 2014 murder trial in Ontario and founded the Canadian Juries Commission.

He has written letters to justice ministers across Canada expressing his concerns, asking for increases in daily compensation for jurors and making sure there's enough physical distance between jurors.

Farrant said many people will come out of the pandemic with extra debt, a loss of jobs and possible health problems. He said if action isn't taken there will be a lack of people willing to do their civic duty.

"Jury duty will remain and important pillar of the justice system," he said. "That's not going to go away and we need to have solutions in place to meet what I think will be a crisis in the courts."

Trudell agrees something needs to be done to make the jury experience is better, including doing some of the screening for potential jurors online, as well as increasing the amount of money they receive daily.

"If it's the most important function in a democracy then they should be paid a fair wage, not so that everyone wants to do it because they're going to make money, but because it's fair," he said.

Veteran Calgary defence lawyer Alain Hepner has a number of jury trials scheduled and doesn't intend to change the way he does his job.

"Over the years I've done as many jury trials as anybody else in the province so I have to think about the client and you balance that with the needs of the public like the jurors," Hepner said.

"I'm aware of the jurors concerns and let's say there's a jury trial, let's say next November. Is that still going to be a concern? We don't know that. None of us know that.

"It probably will be a little more difficult in the long run, but we have to deal with it on a case-by-case basis."

This report by The Canadian Press was first published April 27, 2020