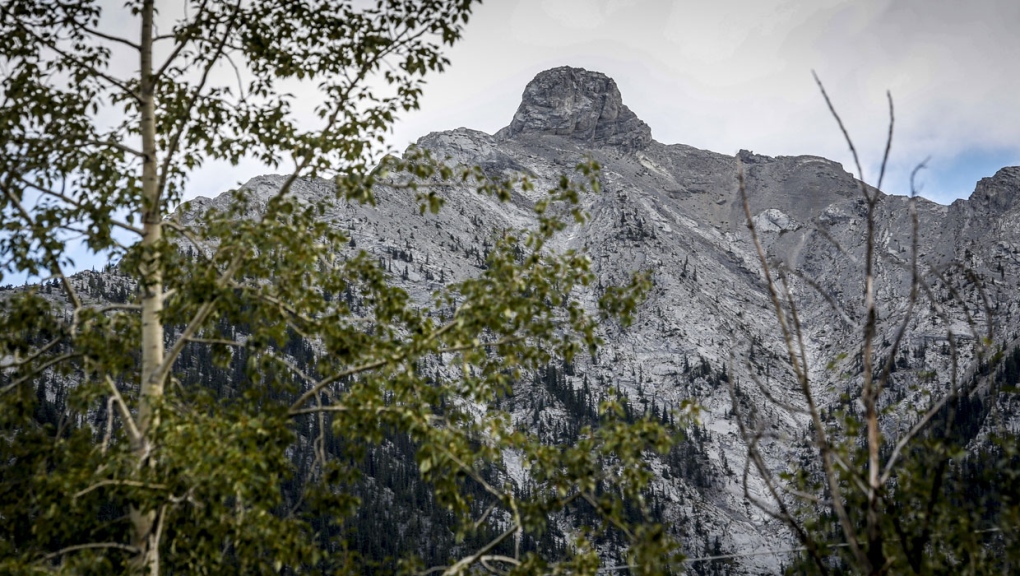 The feature, which has been known since the 1920s as Squaw's Tit, is located near the summit on Mount Charles Stewart and can be seen from the mountain town of Canmore. THE CANADIAN PRESS/Jeff McIntosh

CALGARY -- Momentum is building to properly name a prominent landmark on a mountain in the Alberta Rockies because its commonly used nickname is racist and misogynistic.

The feature, which has been known since the 1920s as Squaw's Tit, is located near the summit on Mount Charles Stewart and can be seen from the mountain town of Canmore.

Two Alberta lawyers, Jude Daniels and Natasha Egan, have been working since 2014 to find a formal name for the landmark.

“(We) are just disgusted by the name,” Egan said in an interview from Calgary. “Colloquially, people call it The Tit.

“So the racism was dropped, but the misogyny remains.”

The word “squaw” came from the Algonquin language and once simply meant woman, but the word has become a term to disparage Indigenous women.

Egan said she and Daniels, who is Metis and works with Aboriginal communities, have been speaking to the province and the Stoney Nakoda Nation to come up with a traditional Indigenous name.

They would like to propose a name that honours missing and murdered Indigenous women, she said.

There have been two recent attempts to officially name the landmark, but the Alberta Historical Resources Foundation board rejected both.

Ron Kelland, a historical places research officer and geographical program co-ordinator with Alberta Culture, said the first suggestion used the second half of the current name.

“For obvious reasons, the board did not find that acceptable,” he said.

Another proposal suggested the spot be called Mother's Mountain, but Kelland said that was also rejected because the board wanted to pursue a traditional or Indigenous name.

“We have been engaging with the Indigenous communities of Treaty 7,” he said. “Some of the communities were actively engaged and talking to their elders and then the whole COVID thing happened.”

No one from Stoney Nakoda could be reached for comment.

The derogatory nickname is used in several hiking and climbing guides, on Google maps and on many trail websites - although Egan said it's been changed on some. She and Daniels have been waiting for a new name before addressing the issue with Google.

In an email, Google said any local authority can request a name change or removal.

The two women have recently received support from the Town of Canmore.

“The name which is commonly used ... has certainly been the name that people have used since I moved to Canmore in the mid-70s,” Mayor John Borrowman said at a recent council meeting. “It's clear and evident that the name is both racist and misogynistic.”

Several other council members spoke in favour of giving the landmark an official name.

“I have two daughters and it has come to their attention as children what the name of that little nub is on that little mountain,” said Coun. Joanna McCallum. “It was a sad, disgusting and horrific day when I had to explain to them what it is known as and that there is no other name for it.”

Borrowman added he finds it surprising the name has never been addressed.

“If the Stoneys have no traditional name or no historical connection to that peak, it still needs to have a new name brought to it,” he said.

Egan hopes to get similar endorsement from the Municipal District of Bighorn, where the mountain is located.

Reeve Dene Cooper said he recently met with Daniels and expects to have a discussion with the district's council in coming weeks.

“It needs a formal name selected on the basis that all other names are selected,” Cooper said in an interview. “We value our relationship with our First Nation neighbours and we believe respect is an action word.”

Egan said the push for an official name has taken on an even stronger meaning with ongoing protests over Black and Indigenous rights across the United States and Canada.

“There's been an awakening in our country and south of us,” she said. “We have a real opportunity.

“It may be symbolic ... but it's important. Words hurt. Words matter.”

Kelland said there's a coulee in the south that was renamed Women's Coulee a few years ago. There's also a mountain in Banff National Park named Stoney Squaw Mountain, which is being considered for a name change.

In the United States, California's popular Squaw Valley Ski Resort announced last month that it will change its name because the word is derogatory. The site was the location of the 1960 Winter Olympics.

This report by The Canadian Press was first published Sept. 6, 2020