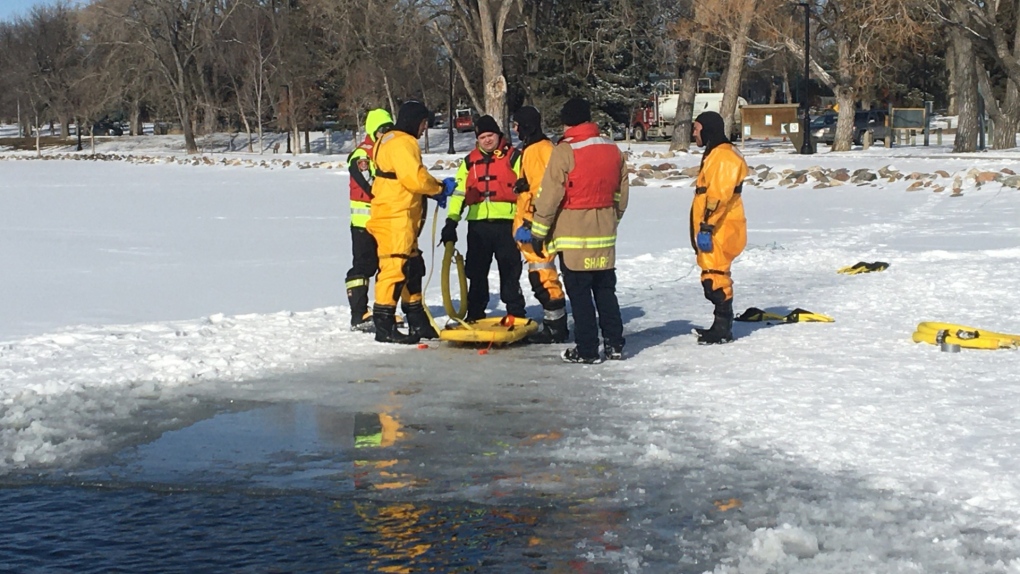 The training runs through different scenarios, like paddling from shallow water and rescuing someone in deeper water, then returning to land.

They're also working on performing rescues that start in the water and the rescuer has to get onto sturdier ice — with and without the help of ice picks.

“We had an ice rescue call over the weekend," said paramedic firefighter Greg Gaudette on the importance of training.

"Turned out everything was OK by the time we got down there but it did open my eyes, I’ve been around for a few years and I didn’t have this course yet, so definitely something to build on myself and hopefully help the department and the city."

Gaudette says he’s not a fan of the cold, or being in water, but the heavy insulated dry-suits kept him much warmer than he expected.

The rescue crew receives a variety of calls, ranging from something as simple as people reporting they don’t think it’s safe for someone to be on the ice, to more complex situations like animals or people that have already fallen through.

"If you see something happen, call 911 and let the rescue crews take care of it safely. We’ve had a number of calls this year already for dogs that have gone through the ice, wild animals, and we want the public to know as well that if you do have an animal that’s gone through the ice … phone 911.

"Don’t try to make the rescue yourself. The worst thing to happen is somebody’s going to go to try to get their dog and they go through the ice."

Pyne adds that people normally have two or three chances to get themselves out of the water before they exhaust themselves and need to call for help.

In an “ideal situation,” he says it takes 11 crew members to assist in a rescue but most of the time they have five or six on scene.

The training course is set up once a year and the certification lasts for two years before it needs to be renewed.