CALGARY -- The United Conservative Party is insisting the group is on the same page after a marathon caucus meeting ended with the expulsion of two MLAs.

But one of those MLAs, Todd Loewen, tells CTV News that's not the case -- and he still believes the party is heading down the wrong path.

The party voted to remove both Loewen and southern Alberta MLA Drew Barnes.

Both have spoken out against Jason Kenney's party in recent months, and both backed a recent internal letter calling for a different government approach to COVID-19.

Thursday, after a seven-hour-long meeting, they were told they were out of the caucus, effective immediately. 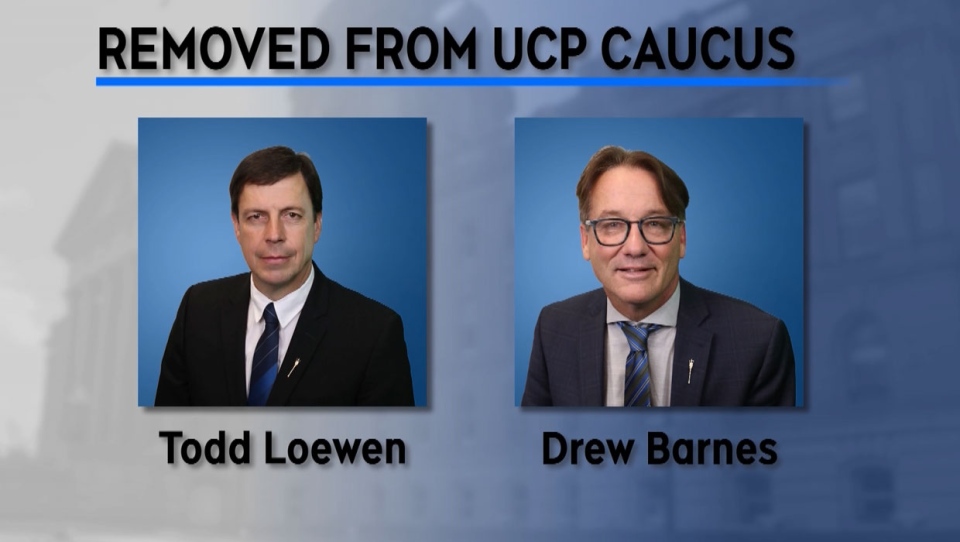 "It's the premier and maybe a small handful of ministers divided against many others across the spectrum, some of cabinet and a lot of caucus," Loewen said. "Obviously this is something the premier wanted and obviously he has a big influence."

The party denies that's the case.

“We look forward to moving ahead as a stronger, more united team," party whip Mike Ellis said in a statement. "There is simply no room in our caucus for those who continually seek to divide our party and undermine government leadership, especially at this critical juncture for our province."

The UCP was born out of a merger between two conservative parties prior to the 2019 election.

Some experts have been saying for months that that partnership is showing cracks.

"The strains between the two wings of this party have been pretty obvious," political science professor Doreen Barrie said. "They're like oil and water."

The party downplays any divide, but Loewen says it's been simmering since late 2019.

On Thursday, some of his former colleagues accused him of adding to it.

"If there was a fly on the wall at that caucus meeting, I think it would hear things that would make that fly blush," Barrie said.

The UCP caucus won't be releasing the results of the vote.

Loewen tells CTV News he was worried about the secrecy of the process and concerned some MLAs towed the party line for fear of repercussions.

"The leader is very, very unpopular in Alberta and I think he's lost the trust of Albertans: that's what I hear over and over again," he said.

The United Conservative caucus says only one member -- the member who tallied the ballots -- knows how MLAs voted.

Both Loewen and Barnes plan to stay on as independents.