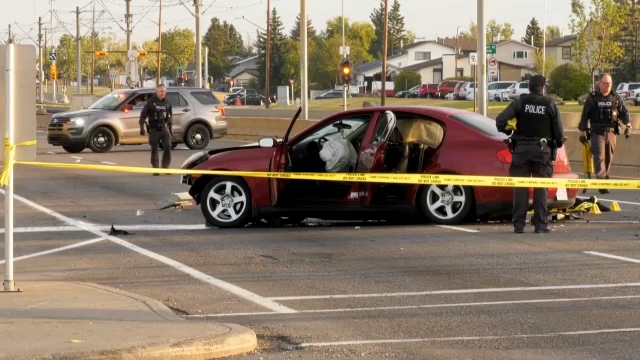 Calgary police investigate after a car crashed into an LRT barrier following a shooting early Saturday. One man was killed and another injured. Police made an arrest on Monday.

CALGARY -- A man is facing charges of second-degree murder connected to a shooting outside a southeast Calgary hookah lounge early Saturday that left a man dead and an innocent bystander injured.

Police were called to the Portico Hookah Lounge in the 1800 block of 35th Street S.E. just before 3 a.m. after two groups of men got into a dispute inside the establishment, which escalated outside, where they shooting happened.

One victim left the scene in a vehicle, which was found when it crashed into an LRT barricade at 36th Street and 26th Avenue N.E.  EMS arrived and transported the man to hospital, where he later died.

An autopsy is scheduled for Wednesday.

"A second man, initially believed to be a bystander, was also injured in the shooting and transported to hospital in stable condition. Investigators are still determining his involvement in the incident," police said in a release.

On Monday, a suspect was arrested at a residence in downtown Calgary.

Police said in a release that detectives are reviewing CCTV footage of the incident and charges are expected against more people.