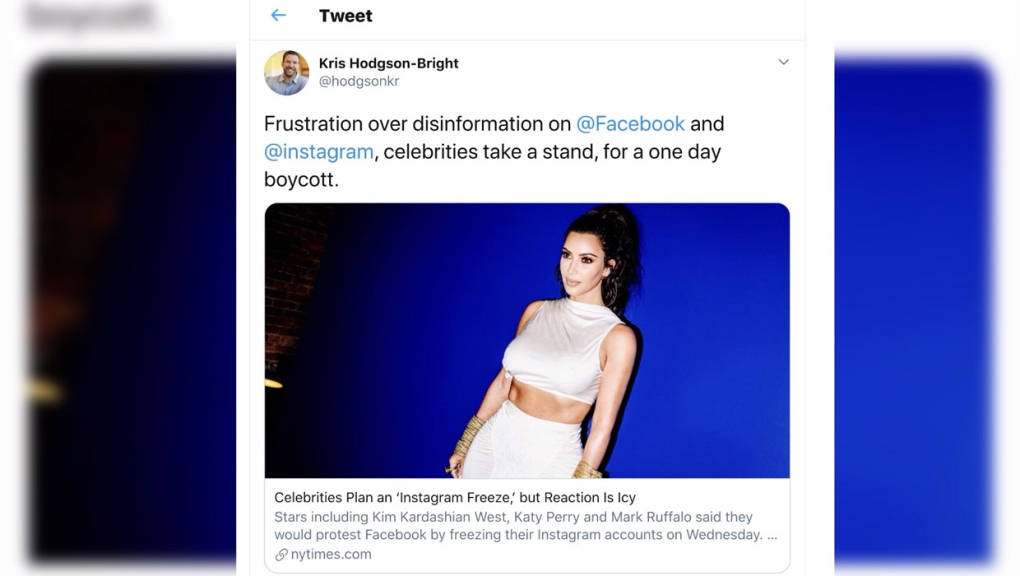 A Lethbridge educator says celebrities boycotting Facebook and Instagram for 24 hours was good, but more needs to be done.

LETHBRIDGE -- If you’re wondering why some celebrities are MIA on some social media platforms, it’s because of "Freeze Wednesday," a campaign aimed at preventing misinformation.

In June, an initiative called "Black out Tuesday" was launched to bring attention to the Black Lives Matter movement. Now, Freeze Wednesday is a call for action to stop Facebook and Instagram from allowing people to spread disinformation and hate speech.

Lethbridge College digital communications and media instructor Kris Hodgson-Bright said there should be stronger monitoring, but admitted it can be tough to do,

"You have to balance that with free speech and expression of thought," he said. "Whenever there's hate speech or anything that’s harmful, racist or inflammatory or anything like that, we really need to encourage our students just to really take a stance as much as can in being socially conscious of how they can create a better environment online."

"If celebrities actually took a stance and deactivated their Facebook and Instagram accounts I think that actually would send a clearer message to Mark Zuckerberg and just see how you can really have a lot more power when you sign off of an account and you find other ways to communicate."

He said he already doesn’t use Facebook or Instagram but said his students do have Lethbridge campus media which is an account they use to share the stories they’re doing as well use it a tool to have better understanding of how to use the benefits of social media.

As for the freeze, it's only one of the steps the group wants to achieve.

The group’s website has a “Week of Action Toolkit” which explains that following Freeze Wednesday, on Thursdays, the message is “Stop Inciting Violence and Spreading Hate” then the focus on Friday is “Election Disinformation and Voting.”

Although Hidgson-Bright believe there could be a firmer intuitive taken by celebrities, he said that the freeze is a step in the right direction. Especially since it’s no secret people prefer to read the quick version on things when they can.

"For those who don’t have the time in the day and they want to do something quick and they see this taken a stance great do something as simple and easy as that and maybe in that opportunity as well take things a little deeper."