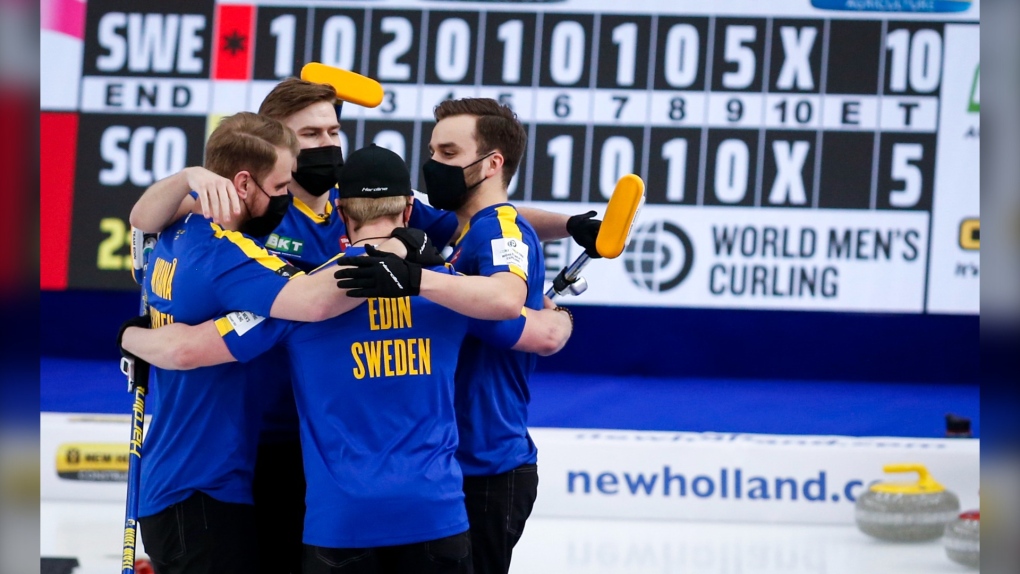 CALGARY -- Niklas Edin's fifth world men's curling title was memorable not only because of the history the Swede made.

That he and his teammates were able to play in a final Sunday for a third straight crown - another men's curling record - made achieving both milestones feel even sweeter.

None showed symptoms of the coronavirus. No games were played Saturday while mass testing was carried out. Alberta Health approved the resumption of Sunday's playoffs.

"Obviously super, super happy we could keep playing," Edin said. "It would have felt so awkward if the event had just ended and medals are going somewhere because of a round robin.

Edin and his third Oscar Erikkson are the only two men to win five world championships. Along with second Rasmus Wranaa and lead Christoffer Sundgren, they were the first team to win three in a row.

Canada's only large-scale sports events since the global pandemic descended just over a year ago have been the world junior men's hockey championship and last year's NHL playoffs in Edmonton, and Calgary's run of seven curling competitions with four now complete.

The men's championship's final day reflected the varying levels of risk tolerance around the virus clashing with a desire for sport to happen.

The athlete who competed Sunday had tested positive in an "exit" test in preparation to leave the curling bubble. His subsequent test Saturday was negative.

The WCF initially barred the athlete from competing Sunday and then allowed him on the ice.

His full vaccination before arriving in Canada, and the argument he posed little risk to teammates and opponents, were the WCF's justifications for the reversal.

The WCF didn't identify the player, but United States skip John Shuster told CBC it was his third Chris Plys.

TSN resumed coverage of the semifinals and medal games without cameramen at ice level.

Curlers wore masks while competing for the first time in Calgary's bubble. Sweepers pulled them away from their faces to catch their breath after hard brushing.

The next three curling events in Calgary include the same virus-avoidance protocols and restrictions established in the first four.

While the WCF and Curling Canada can hand off responsibility for the events to Rogers Sportsnet, athletes continuing to curl in Calgary now have reason to feel uneasy about the virus's ability to infiltrate their environment.

The Canadian men's, women's and mixed doubles championship before the world championship ran uninterrupted by the virus.

During a media conference call Saturday, Curling Canada and WCF officials were visibly rattled by the virus surfacing in the latter stages of their event.

The men quarantined for a week and were tested four times before they were cleared to compete.

Four teams from the world championship - Edin, Mouat, de Cruz, and Canada's Brendan Bottcher - are among those competing for a combined $560,000 in prize money in the Grand Slams, which feature top domestic and international teams.

Kerri Einarson, who will represent Canada at the women's world championship April 30 to May 9 in Calgary, is also in the Grand Slam fields.

The chief medical officer of Calgary's curling hub believes a COVID-free environment can be restored in between competitions.

"Our protocols we felt were appropriate to maintain a safe environment," Dr. Bob McCormack said.

"We're also in communication with Alberta Health to make sure that we can re-establish a clean and safe competitive environment and bubble so this doesn't become a problem for future events.

"We're not a sport that's a collision sport, not heavy sweating and breathing on each other in close quarters.

"If things change, if somehow the virus gets into the bubble and we come aware of it, then we have to deal with it."

This report by The Canadian Press was first published April 11, 2021.