CALGARY -- A second Alberta resident has died due to complications related to the COVID-19 virus, Dr. Deena Hinshaw confirmed Tuesday.

The woman, in her 80s, was a resident at the McKenzie Towne Continuing Care Centre in southeast Calgary.

Hinshaw said a staff member and two other residents of the long-term care facility have also tested positive for the virus.

Eleven other residents are also exhibiting symptoms, although test results are pending.

According to a statement from the care centre's operating company Revera Inc., the resident who died was tested for COVID-19 after developing symptoms on Sunday. She died on Monday.

"We offer our most sincere condolences to the family and friends of the resident. The employees of McKenzie Towne, and the entire Revera family, are devastated by this tragic news," the statement read. 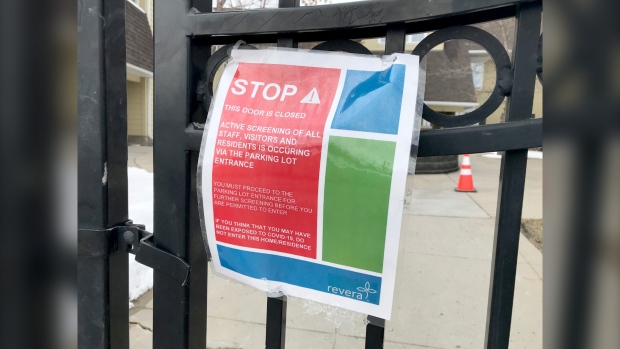 The outbreak at the continuing care portion of the centre does not affect the McKenzie Towne Retirement Residence, Revera said.

Dr. Deena Hinshaw said Tuesday the employee who tested positive had no travel history and did not work while exhibiting symptoms. Revera said the employee last worked at the centre on March 9 and started to exhibit symptoms on March 12. She is now at home in self-isolation.

The first death in Alberta was a man in his 60s in the Edmonton zone.

Another 57 cases of the virus were confirmed in Alberta on Tuesday, bringing the provincial total to 358.

This is a developing story.