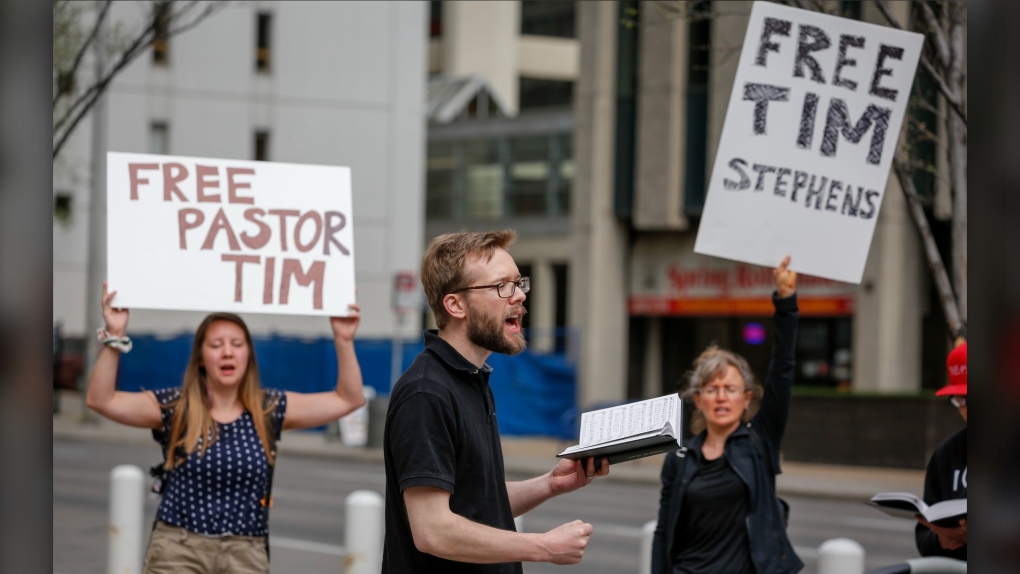 Supporters of Pastor Tim Stephens sing hymns and pray outside the Calgary Courts Centre in Calgary, Alta., Monday, May 17, 2021. (THE CANADIAN PRESS/Jeff McIntosh)

CALGARY -- A Calgary mayoral candidate and a pastor who were both arrested for allegedly violating COVID-19 laws over the weekend were released from custody Monday pending future court appearances.

Calgary police allege Kevin J. Johnston, who is running in this fall's municipal election and has been a vocal supporter of anti-lockdown protests, was in violation of a court order when he attended illegal gatherings Saturday.

An injunction obtained by Alberta Health Services on May 6 mandates that event organizers comply with public health restrictions, including masking, physical distancing and attendance limits.

The Court of Queen's Bench also imposed a restraining order on Johnston last week. It required that he stay at least 100 metres away from health officers and not publish any threats or hate speech directed at them.

Johnston's lawyer asked the court if his client's interim release would preclude him from continuing to campaign for mayor. He was assured it would not.

"From AHS' interests, as long as there is compliance with the two orders enjoining conduct, it doesn't matter to us what Mr. Johnston does or doesn't do," said Mark Jackson, who was representing Alberta Health Services, the agency that delivers healthcare in Alberta.

Johnston has appeared regularly online, promoting far-right ideology, and AHS has said he has been aggressive and threatening towards two particular health workers as well as to its general workforce.

He expressed concern from the prisoner's docket Monday about being required to wear a mask.

"I simply cannot wear a mask. I'm already feeling the anxiety of this right now and I'm sweating. I'm bothered by having to have this on. I could not possibly wear a mask for that entire amount of time," he told the court.

Johnston has been ordered to return to court June 16 to deal with contempt charges for violating the directive.

About 20 people, meanwhile, gathered outside the Calgary court in support of Pastor Tim Stephens, who was arrested Sunday for organizing a church service at Fairview Baptist Church. Police allege the service did not comply with public health orders.

Holding signs that said "Free Pastor Tim" the supporters prayed and sang hymns prior to the court appearance.

Police said they received repeated calls from concerned citizens about services at Fairview Baptist Church in recent weeks, and that Stephens was proactively served a copy of the May 6 order last weekend.

But his lawyer said the order has been modified by a judge, which narrows its scope, and Stephens was not in violation.

"The effect of that amendment to our understanding was essentially that the May 6 order would only be applicable to the respondents and people who were under their direction. That would not include Mr. Stephens," said Leighton Grey.

The contempt matter will also be heard June 16.

Edmonton Justice Adam Germain said he has been directed to deal with all matters related to violations of the COVID-19 court orders.

"The reality may be there are going to be other arrests in the Calgary area and elsewhere and that I may see the same personnel appearing in front of me," Germain said.

This report by The Canadian Press was first published May 17, 2021.