It was like a trapdoor in the middle of a Calgary sidewalk, says a man who was injured after falling through a metal plate that shifted as soon as he stepped onto it.

Jason Knowlton said he was walking along the sidewalk on 16 Avenue near Banff Trail when he stepped on a metal plate which suddenly tipped, dropping him into a hole up to his waist and pinning his leg.

The Airdrie man said he tried to wave down passing traffic to help him out but managed to finally get out on his own.

Knowlton was already on his way to a doctor’s appointment at Foothills Hospital so went early and said he was seen by an E.R. doctor who took an x-ray of his leg. Nothing was broken, but he did sprain his ankle and rotator cuff. 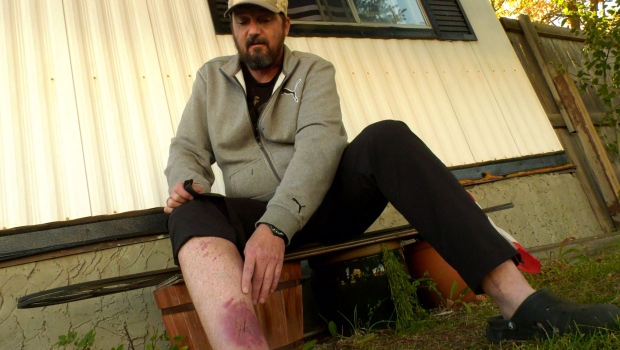 He is sharing his story in order to warn others about similar dangers.

Knowlton later took photos of the rusty metal plate in the sidewalk and reported it to police and the city through 311.

Warning signs and a pylon have now been placed in the area to warn other passersby.