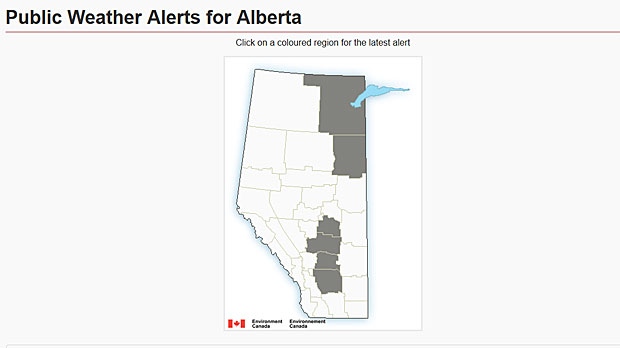 Environment Canada issued a special weather statement for many parts of central Alberta on Friday saying conditions are favourable for funnel clouds to develop.

The weather statement was issued at 10:30 a.m. and covers a number of areas in Alberta:

The agency says that conditions are favourable for the creation of funnel clouds generated by a weak rotation.

The conditions aren’t normally a danger near the ground, but there is a possibility that they could intensify and become a weak landspout tornado.

If those conditions do manifest themselves, then Environment Canada will issue appropriate watches and warnings.

CTV Meteorologist Kelsey McEwen says the atmospheric set up Friday afternoon can often be seen in springtime. "Cold core funnels are generally high based, meaning they're not likely to touch the ground. But, there is the risk of landspout tornadoes developing, so any sightings of funnel clouds should be taken seriously."

Residents are advised to treat any funnel cloud sighting seriously and should take shelter if one develops in the vicinity.

Severe weather reports may be made via e-mail to storm@ec.gc.ca or by tweeting with the hashtag #ABStorm.

For the full forecast, check our weather page.