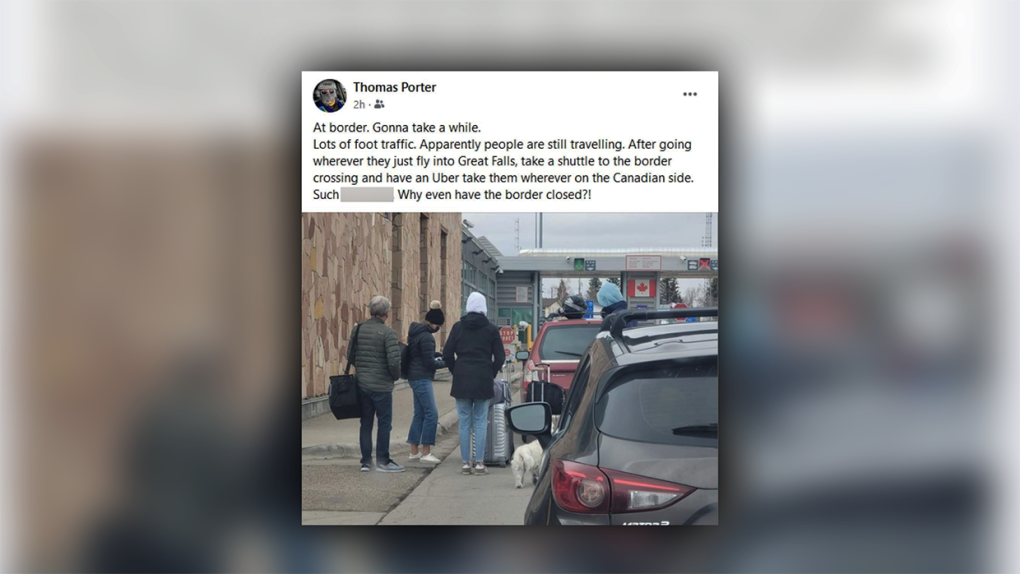 Essential worker Thomas Porter was shocked by the number of people crossing the Sweet Grass/Coutts crossing by foot.

LETHBRIDGE, ALTA. -- Thomas Porter recently returned home from a work trip to the United States. As an essential worker, he's left the country twice in the last year.

On his most recent return to Canada, something was noticeably different.

Porter was shocked by the number of people walking across the Sweet Grass/Coutts border crossing. "There were three times that many that went through prior (to the photo being taken) and more being dropped off in the line behind," said Porter.

He was stuck in line for over an hour and a half.

"That's the longest I've ever had to wait," he said.

The border has been closed to non-essential travel since last March but some travelers have found a way around the hotel quarantine, choosing to fly close to a border crossing, then entering Canada on foot.

Porter says he doesn't want to judge anyone's situation. "Everyone has their story," he said.  "Maybe they have extenuating circumstances, (maybe) some (one) has passed away, but in the volumes (of people crossing) I was seeing and folks struggling with golf clubs, it left a bad taste in my mouth."

BOOM TIME FOR TAXI AND LIMOS

Canadians returning by air are required to quarantine in a hotel until they get a negative COVID test; but, those entering at land crossings simply quarantine at home. That has led to a surge in calls for taxi and limousine services from Canadians who fly into Montana's Great Falls airport and then walk across the Sweet Grass/Coutts border crossing.

One of those companies is BlackedOut 406 Taxi & Limousine. "We went from once a week going up to the Canadian border to now it's about two to three trips a day," said owner Ryan Perrin.

A taxi trip from the airport to the border can cost around US$425 or about US$725 for a limo compared to a three-day hotel stay in Calgary that can cost thousands. BlackedOut 406 has partnered with Lethbridge's 94 cabs to help people make the journey. The total cost Great Falls to Calgary is US$1000.

The fees include taxes and gratuity plus Perrin said they help take the guess work out of the experience.

"We email customers aerial maps of the border crossing so they know where we're taking them," he said. "When they're done with Canadian customers where they exit the facility."

Canada Border Services say non-commercial crossings are way up, about 60 per cent more this April over last April.

Porter said the rules should be the same for everyone entering Canada. "I'm COVID fatigued, my family is, and we all want to get back to a sense of normalcy. We're being told that this is what we shouldn't be doing and seeing that is kind of divisive," he said.

The Canada-U.S. border remains closed until at least May 21. The mandatory hotel quarantine for air travelers is also in effect until that date.