'My heartdog': Misunderstood wolfdogs get permanent home at sanctuary near Calgary 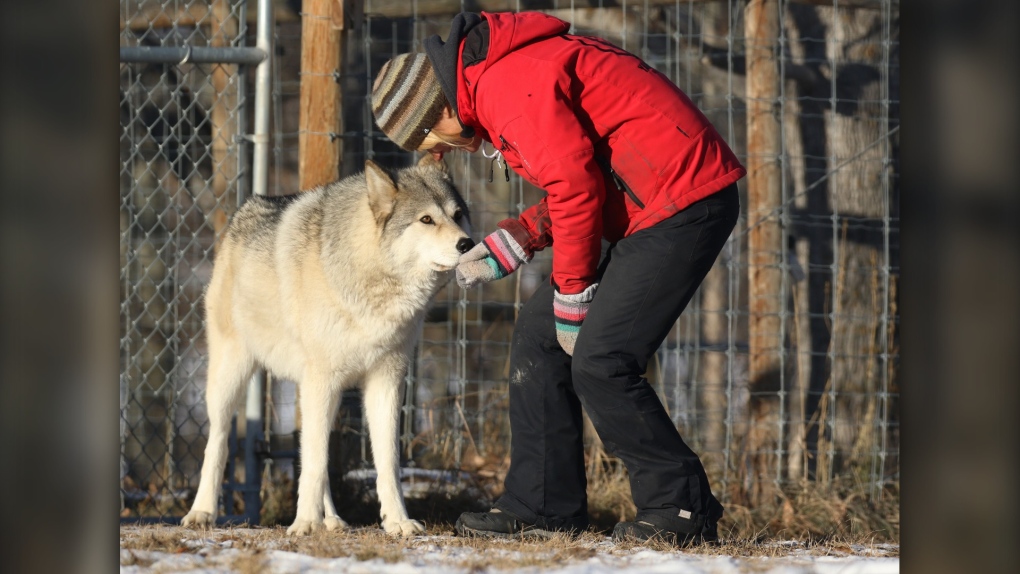 COCHRANE, ALTA. -- Angie Birch isn't worried for a moment as she's greeted by Rocky, Rue and Loki at a sanctuary for wolfdogs whose unpredictable behaviour and innate fear of humans make them too hard to handle for their original owners.

"We're going to have a visit. Please be nice," says Birch as she sits down on the ground at the Yamnuska Wolfdog Sanctuary, her three admirers licking her face and leaning against her.

"What a good boy. Could he be more precious?" she asks about Rocky.

Birch started out as an intern at the sanctuary, about 15 kilometres west of Cochrane, Alta., nearly six years ago. She's now a tour guide and helps take care of the 37 wolfdogs permanently housed there.

Birch says some will learn to trust right away, but one fellow named Zeus was wary for four years before that changed.

"Every morning when I go in, I get some pretty nice snuggles from Zeus. I ask him do you feel like snuggling today? He'll either come and lean right into me and rub his forehead into me or he'll just look at me and walk away," she says with a laugh.

A wolfdog is produced by mating a domestic dog with a grey wolf, eastern wolf, red wolf or Ethiopian wolf.

Anyone familiar with the HBO TV series Game of Thrones would be struck by the wolfdog's similarity to the dire wolves featured prominently in the show.

Alyx Harris, the park's operations manager, says many pet fanciers don't realize what they're in for when they decide to get a wolfdog and that's why the sanctuary is near capacity.

"They're super challenging to have as pets. They don't care about humans the same way a domestic dog does and don't have that same affinity to want to please humans or be around us as much," Harris says.

The recent addition of 10 wolfdogs as a result of an out-of-province animal cruelty investigation has stretched resources and space. Not taking the animals would have resulted in them being put down, Harris says.

She says wolfdogs aren't considered dangerous, because wolves have an instinctual fear of humans. But that also makes it difficult for them to make a connection. She says they're considered to be exotic pets, but that has backfired.

The entire sanctuary covers about a hectare and is fenced in with roomy individual enclosures that hold up to three animals. The environment is entirely natural with native trees and grasses.

There are almost 25,000 visitors a year, Harris says. And while there have been about 50 adoptions since the sanctuary opened 9 1/2 years ago, the animals there now are not appropriate for people to take home.

"This is their forever home. They will remain here at the sanctuary for the rest of their lives."

For Birch, it's Rocky that's her favourite and the one she has taken home with her on occasion.

This report by The Canadian Press was first published Nov. 30, 2020.