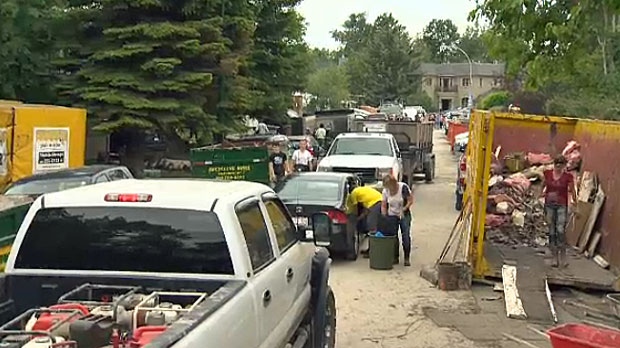 Friends, neighbours and complete strangers helped out in flood ravaged communities in the days and weeks after the flood.

After the flood last June Calgarians came together to care for their neighbours and fix communities and the city is inviting citizens to get together to celebrate those accomplishments.

The city has declared Saturday, June 21, 2014, Neighbour Day, and Calgarians are encouraged to organize community events to commemorate the one year anniversary of the floods.

“We've had a tough year,” said Mayor Naheed Nenshi. “But it's also been a year of triumph as we showed the world who we are and how we help each other. On June 21, let's remember what we've lost, but celebrate what we've gained: an even stronger community.  Get to know your neighbours--it's the most rewarding thing you can do!”

The day is intended to celebrate community spirit and recognize the outstanding outpouring of kindness and citizenship shown by neighbours to overcome one the greatest challenges in the city’s history.

Some communities are having block parties and others are hosting barbeques and community cleanups.

The city says to check with local community associations to see if plans are already underway and if they’re not, citizens can start their own celebrations.

They also suggest community leaders notify local city councillors and the mayor about party plans as council will try to attend some of the events.

The city plans to hold a formal commemoration event on June 20 and says details will be released in the coming weeks.