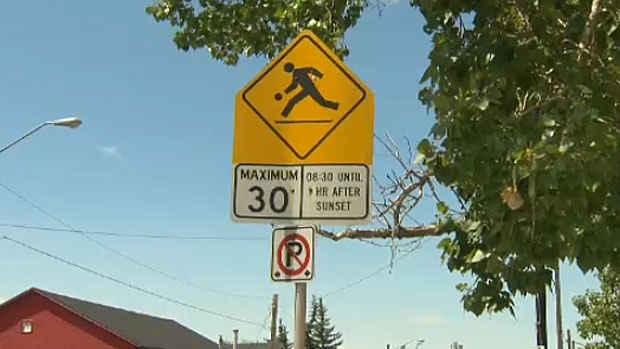 Council has passed an amendment to playground and school zones in Calgary, limiting drivers to 30 km/h from 7:30 a.m to 9 p.m. during school days.

Drivers in Calgary are being reminded to slow down in playground and school zones, especially now that council has passed a new schedule for when those speed limits are enforced.

Under the new timetable, drivers must stay within the 30 km/h limit in playground and school zones from 7:30 in the morning until 9 at night.

It was passed in a nearly unanimous vote on Tuesday, with the holdout being Mayor Naheed Nenshi.

Nenshi does applaud council’s initiative to improve safety, but he does question how late the new times will go.

He says that 9 p.m. is too late, especially during the winter.

Nenshi does say that the reduction in speed does pay huge dividends in terms of safety. “What we know is that the decrease in speed from 50 km/h to 30 km/h has massive, massive benefits, in terms of if you do hit someone, the fatality rate.”

Ward 12 councillor Shane Keating says it’s all about safety. “What we’re doing, we’re talking about making residential areas safe and that’s what it’s all about.”

They’ll all be in place for the new school year, at which time an education campaign will take place.