oTENTiks, equipped camping sites closed for the season in Banff 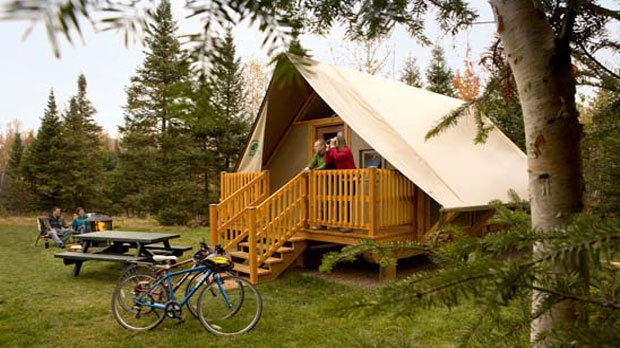 oTENTiks were introduced in Banff and Kootenay National Parks in 2013. (File)

CALGARY -- Parks Canada announced this week that it would be reopening campsites in a number of national parks, including Banff, but the plans don't include oTENTiks.

On Wednesday, the agency said it would be reopening campsite reservations for campers at 31 of Canada's national parks.

Banff National Park was on the list, but the A-frame-style tented cabins set up at Two Jack Lakeside and Tunnel Mountain are still off limits.

Parks Canada says it's not a matter of how difficult it would be to sanitize the structures, but how hard it would be to assign staff to do the work.

"We're balancing out what we can and can't do," said Daniella Rubeling, visitor experience manager with the Banff Field Unit, in an interview with CTV News. "We have a finite number of staff members."

Rubeling says with all the health protocol in place due to the COVID-19 pandemic, the oTENTiks and other equipped sites in Banff will stay closed for 2020.

Whether or not the rest of Parks Canada's oTENTiks remain closed for the season depends on local circumstances, Rubeling says.

For those seeking entry to Banff's historic sites, officials say you'll need to wait for the 'all clear' there too.

Rubeling says there is the possibility they could open later in the season, but there is no date set.

She adds the best thing for visitors to the park to do would be to do their research before setting out.

"I want to remind people to check the website," she said. "We always want people to be prepared with a 'COVID kit' which includes hand sanitizer and disinfecting wipes."

The oTENTiks were released for public use back in 2013. Twenty of the units were set up in Banff and Kootenay National Park.

The units have since been installed at various other parks throughout the Parks Canada network.