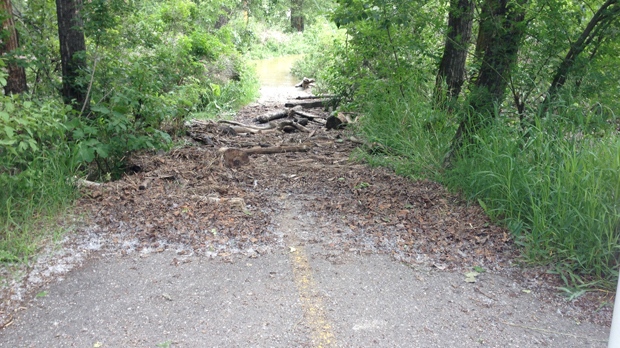 The City of Calgary Parks department is asking Calgarians to be patient during the recovery effort to repair the remaining 36 kilometres of city pathways damaged in June’s historic flooding.

Repairs to the remaining section of flood ravaged pathways, 25 sections stretching a total of 36 kilometres, will require environmental and land ownership considerations. Several areas of river banks will need to be reconstructed, which requires the approval of both the federal and provincial governments, before pathway paving can begin.

“Calgarians value their pathways,” says Todd Reichardt, City of Calgary Parks Manager. “We recognize alternate routes add time to commutes and the impacts closed pathways have on recreational users. Be assured we are working to minimize these inconveniences as much as possible.

The city’s scheduling of pathway repairs will be at the mercy of ‘fish windows’ which protect fish habitats from the impact of construction. In-stream construction in the Bow and Elbow Rivers will not be permitted during the fish windows of the month of April, and July through September.

“The current fish window is rapidly coming to an end, and the next window won’t open until April,” says Reichardt. “Throughout the fall and winter, we will seek approval from the appropriate authorities so that in-stream work can resume once the fish window opens again.”

Calgarians are asked to obey pathway closure signage and to not disturb city signs.