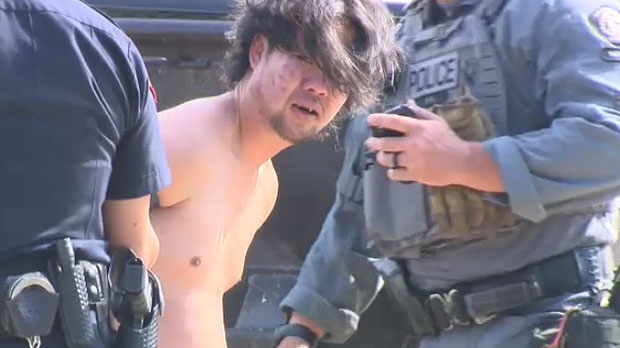 An unnamed man is taken into police custody on July 4, 2017 following a multi-hour standoff in the city's southeast

Charges are pending against an unnamed man in connection with Tuesday’s stabbing outside of a southeast business and, according to police, the suspect was involved in at least two cases of road rage that morning.

On Tuesday, at roughly 9:40 a.m., a pedestrian was walking in a parking lot in the 300 block of 36 Street Northeast when a red truck approached. The driver of the truck yelled at the pedestrian and struck them with the vehicle. The driver attempted to hit the pedestrian a second time but the road rage victim evaded the truck. The pedestrian called police and the driver drove off. The extent of the victim’s injuries, if any, has not been confirmed.

Investigators believe the same driver and truck were involved in another road rage incident at around 10:00 a.m. in the southeast. The man and the driver of a second vehicle entered a parking lot in the 5100 block of Hubalta Road S.E. The two men engaged in a heated exchange and the driver of the red truck allegedly stabbed the other motorist. The injured man made his way to a nearby Auto Value store for help while the driver of the truck fled the scene. The stabbing victim was transported to hospital in life threatening condition.

Several minutes later, police were called to a convenience store in the 4500 block of 8 Avenue S.E. following reports of an encounter involving an armed man and one of the store’s customers. The armed man’s description matched the description of the suspect in both the stabbing and the pedestrian strike. The suspect drove to a nearby residence and officers followed.

After a standoff that lasted several hours, the suspect exited the home and was arrested.

The suspect remains in police custody and charges are pending against the unnamed man. The man's identity will be released once he is formally charged.