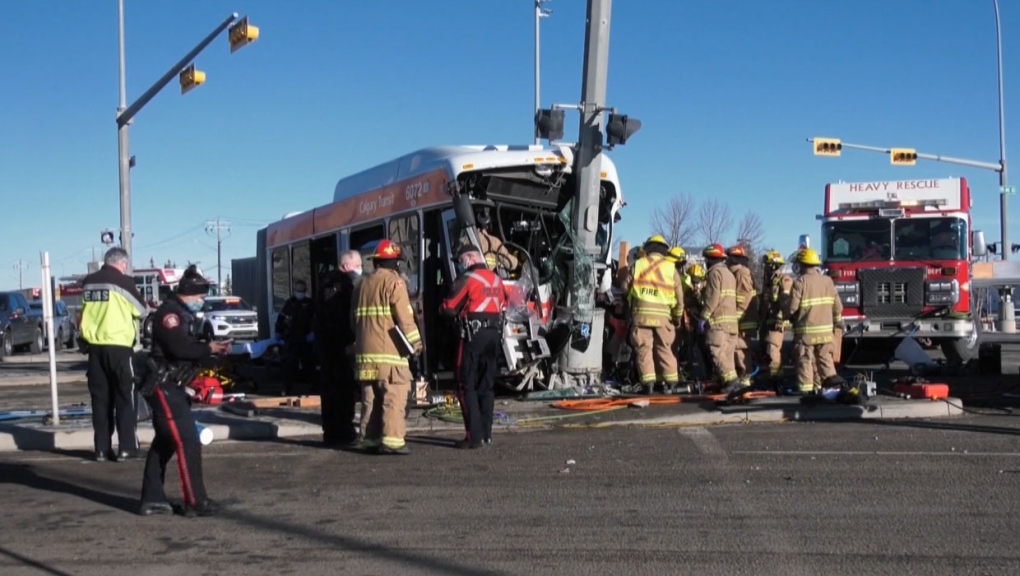 Four people, including a 52-year-old Calgary Transit bus driver, were sent to hospital after a crash Thursday morning.

CALGARY -- Calgary police are looking for the public's help to learn more about the circumstances of a crash that sent four people, including a Calgary Transit bus driver, to hospital.

When they arrived along with EMS and the Calgary Fire Department, they found a Calgary Transit articulated bus had collided with a semi truck.

According to an initial investigation, the truck, a 2021 Western Star "Tractor", was northbound on 52nd Street and was preparing to turn left onto 90th Avenue.

At the same time, a 2013 Calgary Transit articulated bus, with four passengers on board, was southbound on 52nd Street, approaching the intersection.

Police believe the driver of the truck, a 63-year-old man, turned left into the path of the bus.

"The truck turned left in front of the bus and struck it on the left front corner. The bus continued past the truck and veered to the right where it struck a traffic light standard on the southwest corner of the intersection, causing significant damage to the front of the bus," CPS wrote in a release.

The truck stopped against the rear of the bus following the impact.

As a result, the bus driver, a 52-year-old man, and three of the four passengers were taken to hospital in life-threatening condition.

The truck driver suffered only minor injuries and was treated at the scene.

Alcohol and drugs have been ruled out as factors in the crash, but police would like to speak to any additional witnesses who can give their account about what happened.

Anyone with information can contact police by calling the non-emergency number at 403-266-1234 or contacting Crime Stoppers anonymously through any of the following methods: