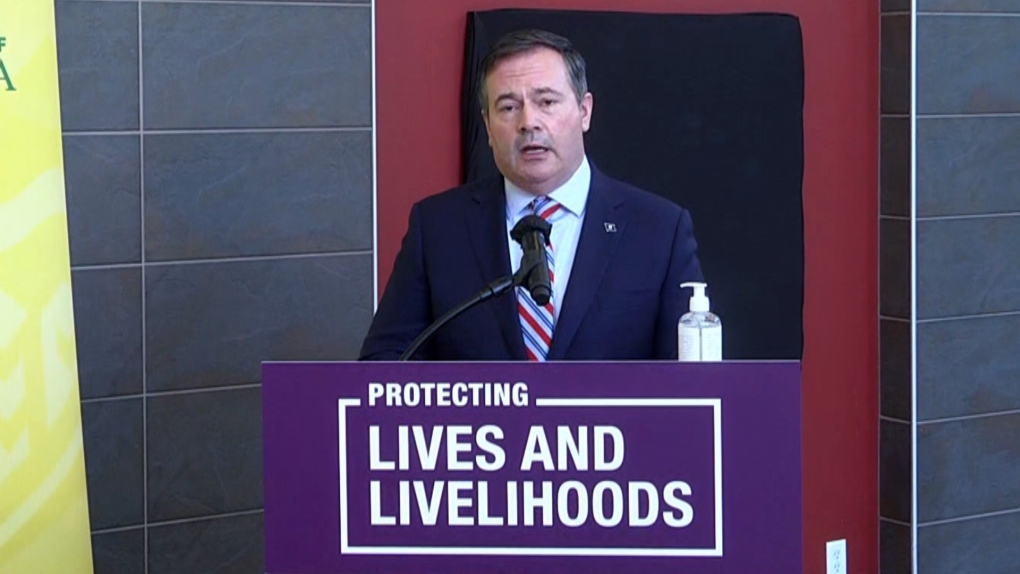 Premier Jason Kenney speaks at a health announcement on Thursday. Kenney said the province is considering a regional approach to reopening after a group of MLAs released a letter to Albertans.

CALGARY -- Premier Jason Kenney said again Thursday the province is looking at using a regional approach to reopening after 17 UCP MLAs put their names behind a letter admonishing the return to Phase 1 this week.

Kenney made the comments at a press event Thursday, one day after 15 UCP MLAs signed a letter — and two more MLAs later added their names — questioning the return to Phase 1 of reopening. The letter said the province should adopt a regional approach.

Cypress-Medicine Hat MLA Drew Barnes told CTV News that some parts of the province, including the area he represents in southeast Alberta, should have been moved to Step 3 this week, rather than back to Step 1.

"Step 3 would allow restaurants to continue to have (indoor) dining. They would allow churches to have a bit more square footage occupancy, it would allow more kids sports involvement," he said.

"So I think, particularly on a regional basis, Cypress-Medicine Hat, we should have moved into Step 3, I would like to see that happen still."

Moving to Step 1 means, as of noon Friday, indoor dining is not allowed at restaurants and pubs across Alberta, though patios will still be allowed, along with takeout service and curbside pickup.

The letter was signed by 15 MLAs, and later on Wednesday. Vermilion-Lloydminster-Wainwright MLA Garth Rowswell added his name to the list, along with West Yellowhead MLA Martin Long.

Barnes says he wants to see a regional approach as the restrictions are nearly as harmful as the virus on his community.

"We're more than 13 months into the regulation, restrictions and the lockdown around COVID and Cypress-Medicine Hat, my constituency, we're facing a mental health, a physical health a spiritual health and an economic crisis as challenging as the COVID crisis," he said.

"At times we've had almost zero cases, our hospital is not overwhelmed, there's lots of room there. A lot of these restrictions were never meant for 13 months and when we're faced with all the other issues, when we're faced with the fact that vaccinations are to all our long-term car people, because yes, it's most important to protect our vulnerable, most of our healthcare workers are vaccinated now, summer is coming, it's time to protect civil liberties."

Kenney also said on Tuesday — one day before the letter was released — that a regional approach is something the cabinet committee is considering.

"We have looked very closely at applying restrictions or accelerating easing of restrictions on a regional basis. As I announced on Tuesday, that we're putting together a caucus working group to work with the minister of health on that," said Kenney.

"We acknowledge that at some points throughout the pandemic we've seen some regions with very low or no COVID cases and significant spikes in other zones.

"The challenge has been that of course the virus moves very quickly and people move as well, and the virus moves with them, and so we don't want to end up in a situation where we hermetically seal Albertans into their own local area. Not permitting travel, that would be I think pretty extreme."

Kenney also added that since the start of January, some rural areas have been harder hit than cities like Calgary and Edmonton.

"But I don't say that as a judgement, it's just a reality with which we've had to cope, so the notion there is a view amongst some that we can just sort of carve out rural areas because they're less densely populated, and I understand the population density issue, but at the end of the day, we have to look at how fast the virus is moving in certain populations, and in certain communities," he said.

"That's what has informed our policy approach. But we know that we're getting to the end of this thing, thank God, with the vaccines, I laid out on Tuesday, what we see as the path forward based on moving toward community immunity."

Barnes says the response to the letter has been "overwhelmingly positive."

"From my constituents, it's probably 90 per cent in support, people that are feeling the lockdown fatigue. People that want to take responsibility for the vulnerable, the compromised, themselves and their families in different ways and they've reached out and I'm very, very grateful to all Albertans that have."

Some doctors in the province have been calling for tighter COVID measures as the province moves into what Premier Jason Kenney has called a third wave.

"I would say that as we enter the second year of this, as we’re told again, just a couple more months, or a little while longer, I would say that in large parts of rural Alberta, the COVID crisis has not been any bigger than the mental health and the economic crisis," said Barnes.

"And for those that want vaccinations, that's going to go a long way to protect us all and we're almost there, keep going."

The group of MLAs represent mainly rural ridings across the province, including: