CALGARY -- Tiffany Hillier was able to say good-bye to her grandfather Isaac last month, just hours before he died.

But she couldn’t see him, because he was in the hospital and current pandemic health rules forbid most visitors.

Only her mom was by Isaac’s side.

“My mom called me on video chat from the hospital,” Hillier said, “I got to say my last goodbye , tell him I was engaged and getting married next year so it hit me hard.”

Those same rules forbid outdoor gatherings of more than 50 people.

Attendees at anti-racism marches that took place in Calgary this week numbered in the thousands, with virtually no compliance with the two-meter physical distance rules, and Hillier said its unfair that some people could ignore the rules while others face hefty fines. 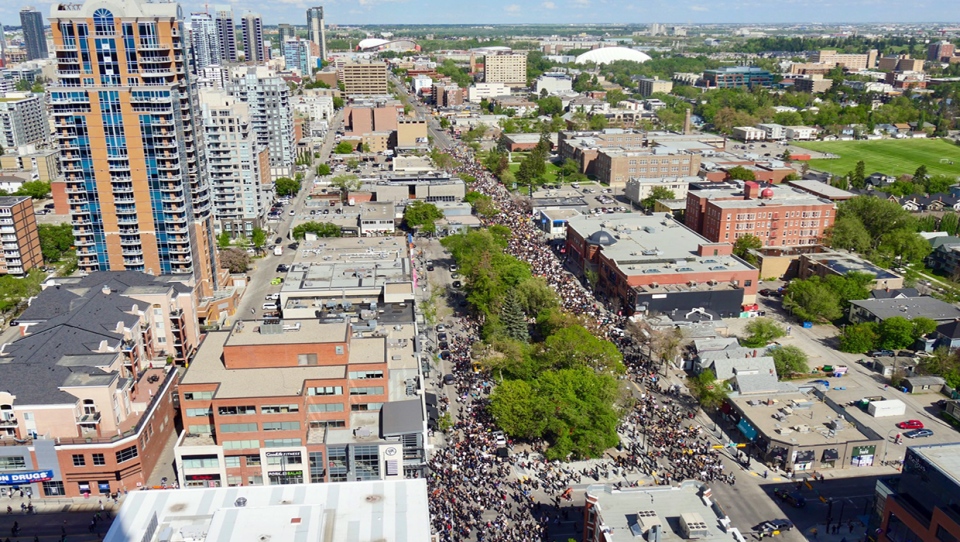 In his Thursday press conference, Calgary’s mayor agreed  that the health risks associated with marches as large as the ones that took place could be dangerous, calling it a “huge potential risk.”

But Naheed Nenshi also said protesters won't be punished for breaking the rules — and that Calgarians shouldn’t use this as an excuse to flout the law in a public health emergency.

“If I can be blunt, fighting for the right to life in a protest is not the same as going out for beers with your softball team," Nenshi said. "And I think Calgarians are thoughtful enough and compassionate enough to understand the difference."

“I could go on about how it  (the march) was outside, how most wore masks and the risk of transmission even in a crowd that size is low, but there is definitely a risk there,” he said.

That’s why Hillier said if exceptions can be made for political protests, they also should be for grieving families, who aren’t content with online or virtual memorials.

“You need to support each other and have a shoulder to cry on," she said. "You can talk to each other in person it shows you are there as a family.”