Pulling it together: Canadian armwrestling champ reaches for the top

A Canmore woman is getting ready to take on the best from around the globe at the World Armwrestling Championships in Romania later this year.

Annie Beals is a national champion in armwrestling and hopes to grab the world's attention this fall.

Beals, 32, only took up the sport three years ago.

"A friend of mine suggested that he thought that I would be good at this sport, so he took a year or two to persuade me to finally enter tournaments," said Beals.

Beals has pulled herself to the top of the sport in Canada quickly.  She won gold medals in four categories at the national championships in Edmonton in July. 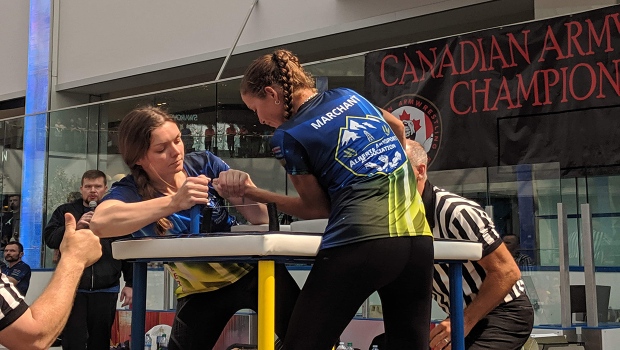 Beals is naturally right-handed but won with both arms.

"I have been a climber for 20 years," she said. "I have also been a white water rafting guide for the previous six years, so I had good upper body strength anyway."

Beals, a member of the Calgary Rams Armwrestling Club, is preparing for some stiff competition at the worlds.

"Armwrestling in Europe is a much bigger sport than it is in North America," she said. "There are a lot of very, very strong women in Europe who've been in the sport for years."

Beals, who is a registered massage therapist by day, says she loves the camaraderie of the sport.  She also encourages more women to reach out and give it a try.

"Most people don't even know that it is even an official sport, other than people messing around in a bar or something."

Beals is looking for sponsors to help cover costs to travel to the worlds, in Constanta, Romania, from October 26 to November 4.