A Calgary-area contractor’s attempt to reduce his cost of living as demand for his business decreased has encountered a roadblock.

During the summer, Gregg Taylor, the owner of a small contracting company, found himself with ample free time as there were fewer construction jobs available.

“I’ve been a contractor for 18 years and it’s been my slowest year ever,” explained Taylor. “For the first time ever, back in June, I found myself without a job to go to.”

During a motorcycle trip to California and the return voyage along the Pacific coast, Taylor came to a realization. He decided to pursue his lifelong dream of owning a home, free from a mortgage or dependence on utilities, and began constructing a self-sustaining house. “I’d always wanted to build a tiny home but it was just timing.”

The contractor designed the building in his head and enlisted help from a family member to weld the frame.

Taylor posted photos of the construction progress on social media and the response was overwhelming. Motivated by the support and interest, Taylor says he became committed to finishing the project.

When the tiny home was constructed to a livable level, Taylor rented five acres of land on Springbank Road and notified his existing landlord that he would be moving out.

The tiny house, which is on wheels, was set in place in early September and he moved into his home on October 1.

“I would fall asleep each night with a smile on my face knowing that I had built with my bare hands,” recalled Taylor. “I didn’t owe any money on it and I could turn on the lights and use power that I stored from the sun and the wind.”

The tiny house is equipped with solar panels and a wind turbine.

“For the first time in my life, I wasn’t dependent on anyone or anything or any bank,” beemed Taylor. “I have a zero carbon footprint out here.”

In the eyes of Rocky View County officials, Taylor’s dream contrasted their land -use regulations and he received a verbal enforcement notice demanding the tiny home’s removal mere days after he moved in. The house was to be removed by the end of November and Taylor says he was informed that failing to comply with the order would result in a $1,500 fine.

The tradesman says he has researched the county’s bylaws and his tiny house presents no obvious violations. According to Taylor, a county planner indicated a permanent residence must be present on a property before a trailer of shed is erected in order to meet guidelines.

“They have these big properties out here. They want you to build a house on them,” said Taylor.“You can put an RV, you can put a trailer, you can put a shed but you can’t do any of those things until after you build a residence.”

Taylor says he was told his home does not meet the necessary requirements as it is considered to be too small and is without a foundation. The tiny house is on a chassis and can be pulled by a truck.

“I’m torn between packing up and leaving or do I owe it to myself, and what I’ve started to build here, to stick it out and see what happens.” Taylor has received land offers for relocation but says the Springbank location is ideal for commuting between jobs in Calgary, Airdrie and Okotoks.

Representatives of Rocky View County have not responded to CTV Calgary’s requests for comment on Taylor’s tiny house.

Should Taylor elect to leave Rocky View County, Calgary could prove an option for relocation.

“There are a number of land-use districts that allow for backyard suites,” explained Stephen Pearce of Calgary Growth Strategies. “Where that’s allowed, you can build a smaller residence with the main residence on the parcel.”

Pearce adds the tiny house, as is, would be considered a recreational vehicle and subject to a number of guidelines. Calgary Growth Strategies recommends contacting City of Calgary planning services for all inquiries related to backyard suites and recreational vehicles.

No matter the result of his dispute with Rocky View County, Taylor is considering constructing tiny houses as a source of income.  “I had so much fun building this. I’d like to build them for clients and I’d like to sell them.”

With files from CTV's Rahim Ladhani 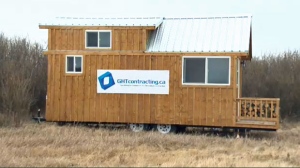