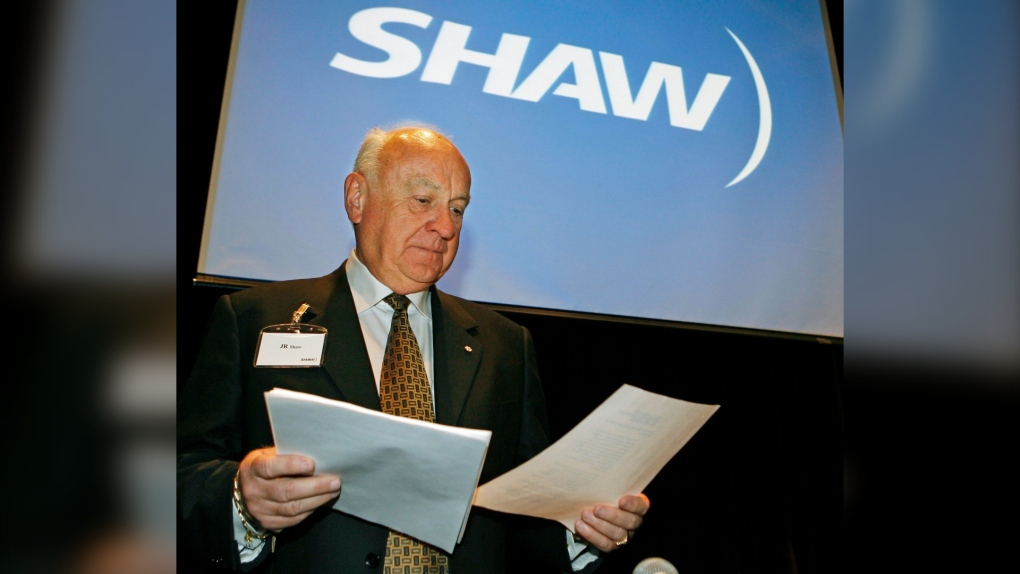 Shaw, who ran the company as chief executive until 1998 and remained its executive chairman, "passed away peacefully" on Monday, the company said in a statement.

JR Shaw founded Capital Cable Television Co. Ltd. in 1966 in Edmonton. It connected its first cable customer and went on the air for the first time in 1971, eventually growing into one of the country's largest cable providers.

In recent years Shaw has grown its wireless business, becoming the fourth-largest network in Canada with the growth of its Freedom Mobile.

JR remained active in the company to the end, serving as executive chair until his death.

"I spoke to JR every day about the business. He was engaged and interested in everything the company was doing — from the latest technology being rolled out to how we were meeting the needs of families across Western Canada," said Brad Shaw, JR's son and the company's current CEO, in a statement.

Brad will take over JR's executive chairman position on an interim basis, the company said. The appointment will be confirmed at an April 9 board meeting.

"JR Shaw was one of the few great business titans who knit this country together," said former B.C. premier Christy Clark in a tweet. "He showed us how to succeed while respecting competitors, caring about employees and giving back to communities. It was one of my life's great privileges to work with him."

Alberta Premier Jason Kenney said he was saddened by the loss of one of Alberta's "titans of business & philanthropy."

"From humble beginnings in Sherwood Park in 1966, JR built one of Canada's largest telecommunications & media companies," Kenney said on Twitter. "My sincere condolences to the Shaw family. RIP."

Saddened by the loss of one of Alberta’s titans of business & philanthropy, JR Shaw.

From humble beginnings in Sherwood Park in 1966, JR built one of Canada’s largest telecommunications & media companies.

My sincere condolences to the Shaw family. RIP. https://t.co/kHkjZrTeD1 pic.twitter.com/rO25LgmLQz

Brad said he and his family are at a loss for words and deeply saddened at JR's passing.

"JR was the founder and leader of our company, but he was also an exceptional husband, a loving father, grandfather and great-grandfather," he said. "His legacy of love and compassion for people will live on for generations."

Shaw was an active philanthropist who was named an Officer of the Order of Canada and received the Alberta Order of Excellence. He also received several honorary degrees and was named to the Canadian Business Hall of Fame in 1998.

He was known as a community builder and supporter of Canadian art and artists.

JR served as the company's CEO, overseeing its growth through acquisitions and other means — and a change of headquarters to Calgary from Edmonton — until 1998.

He then stepped down and his son, Jim Shaw, took over the role until 2010, when Jim's younger brother Brad took on the job.

This report by The Canadian Press was first published March 24, 2020.