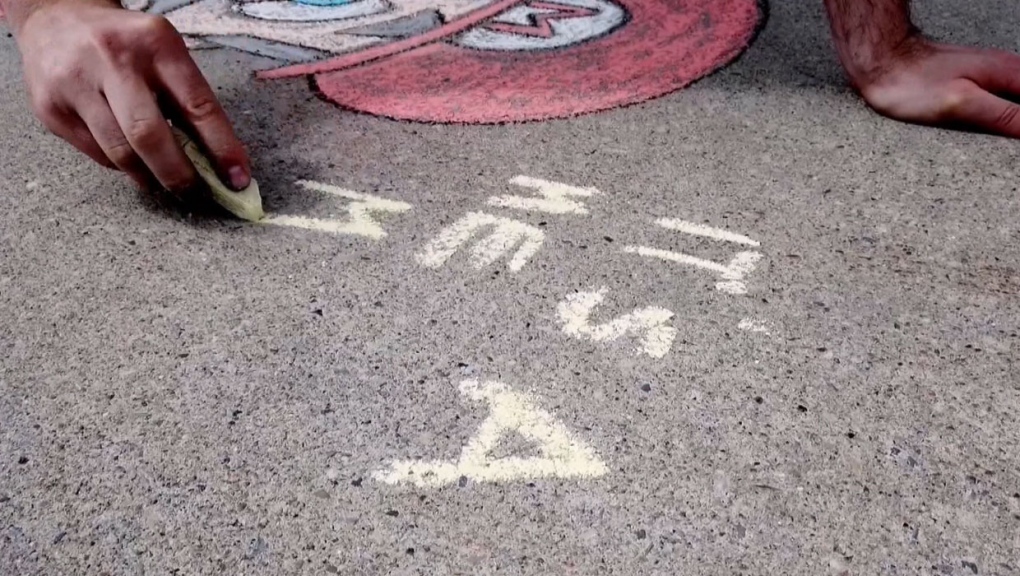 A sidewalk chalk art display has turned into a massive fundraiser for the Calgary Food Bank.

CALGARY -- What began as a way to stay active outside has snowballed into a major fundraising movement across Calgary.

Enjoying time spent creating chalk drawings on the sidewalk in front of their house, Colin and Andrea Baillargeon felt they could take things a few steps further.

The Baillargeons put a sign-up sheet on their house allowing neighbours to make requests for drawings, as well as pledge donations for when the task was complete.

The couple initially had a goal of raising $200 for the Calgary Food Bank.

"We hit that in a weekend," said Colin Baillargeon, while taking a break from creating new cartoons near Glendale School.

"From there, we’ve been taking requests and doing drawings all over the city," he added.

The couple has now created drawings on over 40 sidewalks around Calgary.

"We started in the first place just to make people smile," said Andrea Baillargeon. "We want to be able to remember the silver linings through this tough time, and we’ve received a lot of support."

With a steady stream of requests, the couple are hoping to recruit help in their drive to raise funds across the city.

"It’s a lot to take in, we both work at home with two small children, so if any other artists want to participate we’d gladly accept volunteers," said Colin.

Generating momentum on social media, the Cartoons for a Cause movement now has its own email address for requests.

Anyone interested in making a request or offering to volunteer their artistic talents can contact the Baillargeons via email.