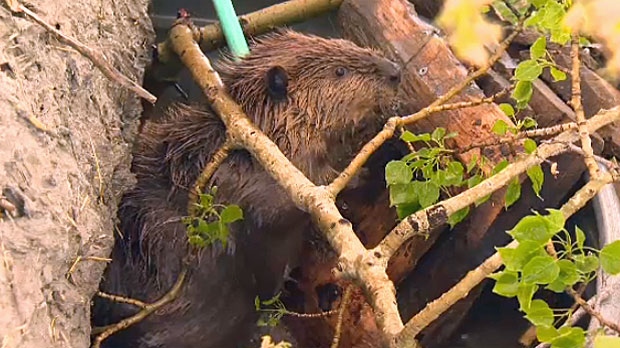 The beavers were just babies when they were rescued and are now ready to be reintroduced to the wild.

A local wildlife rescue society has nurtured a number of displaced animals over the past year and is ready to release two young beavers back into the wild.

The floods last year demolished habitats along some of southern Alberta’s waterways and a number of young animals were orphaned as a result.

Birch the beaver was rescued from the Bow River along with another young beaver named Aspen.

The pair was brought to the Calgary Wildlife Rehabilitation Society and staff at the facility have raised them inside over the winter.

Both beavers have showed their natural ability to chew wood and staff say they used that skill to nearly destroy their enclosures.

“Beavers have very, very strong instincts, so they just know. They know to build dams, they know to build a lodge, they know to cut down the trees, and he was exhibiting, I mean they were chewing on wood from the get go, from when we first got them, and then over the winter they started caching their wood, placing it, doing their little engineering, I mean they couldn't create a dam obviously in our centre, but they were trying. They were doing the best that they could,” said Andrea Hunt, from the Calgary Wildlife Rehabilitation Society.

Birch made his way outside for the first time and will be released sometime this week.

The society was able to find a landowner willing to allow the beavers to live on their property.

The home-made lodge from the wildlife society will also be moved with Birch to give him something familiar to live in when he makes the move to his new home.

Aspen will be released in the coming weeks and after that, the two will have little to no interaction with humans.

The beavers will be monitored to make sure they adapt well to their new home.