Polling stations were busy as soon as they opened on Monday morning and line ups were reported at a number of locations across the city by early evening.

Voters started lining up outside some polling stations at least a 30 minutes before the polls opened at 10:00 a.m.

Election officials say voter turnout was good this year and polls leading up to the election showed a close race between incumbent mayor Naheed Nenshi and challenger Bill Smith.

Some polling stations ran out of ballots on Monday evening and officials asked people to be patient while more ballots were being delivered.

Officials said anyone who was in line by 8:00 p.m. would still be able to vote and that ballots at those polls would not be counted until the last person in line had voted.

Click HERE for more information on the 2017 Calgary Civic Election. 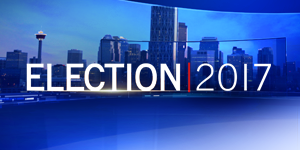