CALGARY -- Across Canada,  the unemployment rate dropped to 10.9 per cent in July - high but well off the May peak of 13.7 per cent. The numbers were collected the week ending July 18.

Interestingly, for the first time Calgary is getting a piece of the rebound.

In early April as the full weight of the pandemic began to settle in and the extent of the province’s looming health crisis was still up in the air, Premier Jason Kenney braced Albertans for unemployment numbers to reach heights not seen since the Great Depression.

Alberta has so far avoided the worst case scenarios — both health and economic — but job loss was historic.

Despite gaining 67,000 jobs in July unemployment is still at 12.8 per cent. It would be the highest unemployment rate since the 1930’s if not for the 15.5 per cent mark reached in June.

While the dropping rate is encouraging, how long the nascent trend continues is an open question.

“[We’ll watch] those core traditional industries and see how they’re responding because it’s those industries that provide kind of the base for all of that other activity to happpen,” Ellingson says.

The recovery has also laid bare underlying inequalities in the economy, apparent in the rate of Job recovery among women, workers under 25 and visible minorities. 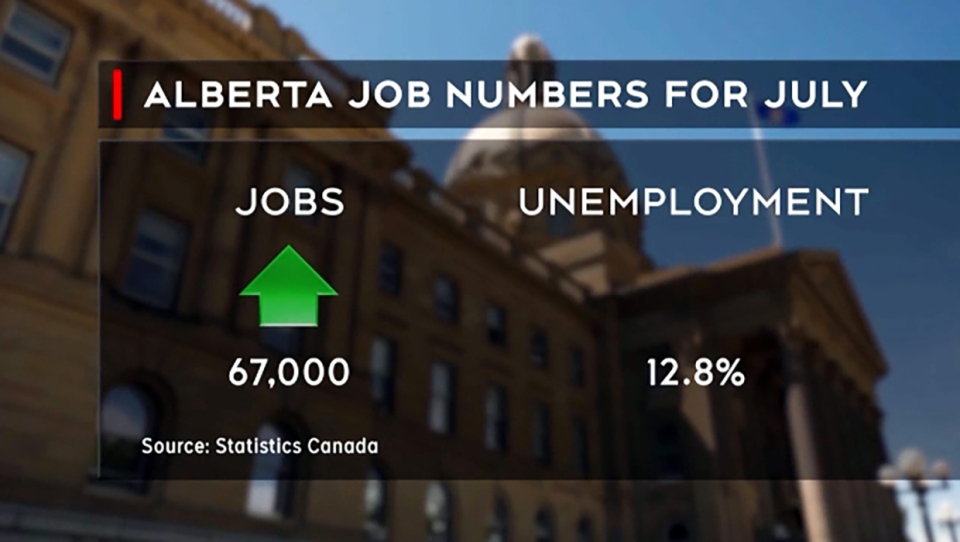 Young men are 26.7 per cent unemployed.

Women are gaining ground the fastest relative to men, but still sit well back of their pre-COVID employment levels.

Black unemployment is considerably higher than the national average at 16.8 per cent — it’s even worse for Arabs recorded at 17.3 per cent and South Asians at 17.8 per cent unemployed.

Economists sugggest recovery plans will need to reduce that disparity in order to succeed.